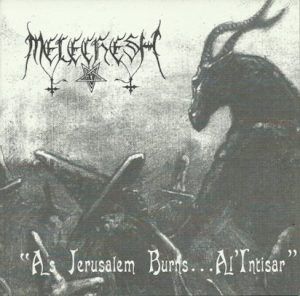 I am still amazed at some of the albums that we get for review here and the re-issue of the debut album from Melechesh is yet another one to the list. Released originally back in 1996 on the now defunct Breath Of Night, “As Jerusalem Burns…..Al’Intisar” appears to be getting a dusting off by Vic Records in the Netherlands. What you will find here is the original debut album’s 10 tracks plus two early tracks preceding the album also from 1996 (“The Siege Of Lachish” and “Malek Al Nar”). The first thing that jumps out at you regarding Melechesh I would think is their country of origin being Israel. While I wouldn’t say they sound like Orphaned Land at all (also from Israel) Melechesh has taken some of the music and tales from there and gone into a different direction….a much darker one. The first comparative band would be Nile for what they have done with Egyptian mythology (even though they are a US band) or classic Morbid Angel or Absu for the sheer speed, aggression and integrity of the music. The tracks for the most part are 3-4 minutes in length which is more than enough time to cram tons of riffs, blast beats and shrieks into every track. The title track and original album closer as well as “Assyrian Spirit” are much longer by comparison (almost 7 and 10 minutes respectively) but neither one of these tracks is filled with slow interlude parts but even more speed and riffs…..almost inhumanly so. With the two bonus tracks, you will definitely hear the huge leap they made into the debut album. The tracks are much simpler and less extreme than the album ones and are a nice addition just to hear how far they came in a short amount of time. Sonically, I don’t hear any sort of major differences if at all to my original version so that would be the question if this is a worthwhile release to jump on. Lead vocalist and guitarist Ashmedi adds some liner notes and there is a new cover and that along with the classic tracks added maybe will sway you if you do not already own this.
Melechesh has probably not gotten as much recognition as they deserve 20 plus years down the road and maybe revisiting this will remind people how epic they are.