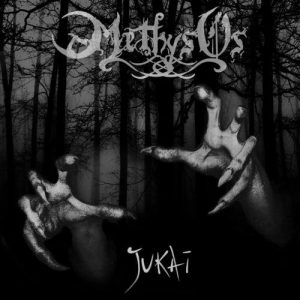 Jukai is the second album from the band MethysOs, who come from Cyprus as the flagship band of folk-metal in their country, trying to stand out among mostly black, death and heavy metal bands there. This new release gives us a better sound in quality and execution than his previous work ‘Folkloria’, especially in the drums and voices, with more elaborated sings, and a personality more appropriate to the genre.
From the beginning of the first song ‘Shinigami’ you can distinguish humppa or polka folk sound, demonstrating the influence of bands like Trollfest or Finntroll, which is also seen in songs like ‘Folkatroll’ or ‘Witches Broom’. Despite this, we note that this type of folk is not the only influence of the band’s sound, but it is one that stands out and is easily identified by its sound. MethysOs style it’s a nice Folk, easy to listen to, with well-managed choirs and melodic changes that keep the songs away from being repetitive.
The melodies that we hear throughout this work are accompanied by folk instruments that could stand out more in some songs. Although they are not lost and have their prominence in several songs, however, the participation of them could be improved to generate a more personal stamp and identity.
The album gives us a respite starting in ‘Advaranaut’, which, despite not having metal-kind voices, has a mixed style of a density with joy that is totally enjoyable. Then, ‘Aokigahara’ put us back into the album’s mood with its guitars, following with ‘Rise of Olympus’ unleashing all the energy we were accumulating. Then, we continue with ‘Eudora’, with a slightly more technical style that gives us some new and pleasant melodies.
Finishing the album, ‘Momotaro’ will make us headbanging with all its energy and nice structure to finish in a very folk and melodic way with ‘Koftos’, a replayable folk song.

In this release, we can say at the end, that you can see the evolution of the band in this new quality work. Quality that we hope will give them a great career, thus putting Cyprus on the world folk-metal map.