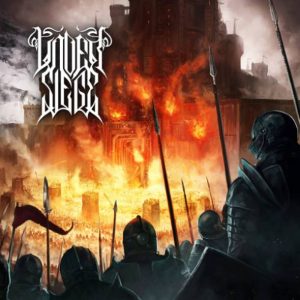 If you went looking for a band named Under Siege on the web, you would find more than one. Even if you looked for one from Italy there are at least 2 bands with that name from there. This one for review is the one with their debut self-titled album and is not the death metal one. Hailing from Italy, this 5 piece have put together 8 tracks totaling just under 40 minutes of listening time. If I was to give you a few bands as comparison I would throw three names at you….Skiltron and Ensiferum with Manegarm to a lesser extent. If I mention Skiltron then you have to figure bagpipes are in the Under Siege sound and you would be right. From the first track (one which I believe combines an intro) “Blar Allt Nam Banag” starts off the album in epic fashion with bagpipes and battle fueled melodic death metal to a degree….and yes you would be right if you think it has a Scottish theme to it. When the pipes aren’t employed then the Ensiferum and Manegarm style could be heard more clearly…… which is most of the album. I wanted some more pipes but I am OK with their style overall without them. They have some mid-tempo and some faster tracks on here as well as a subdued album closer in “Bright Star Of Midnight” so they touch a little bit of every speed on here which is good to show a little bit of everything. I would say I don’t know if they have a defined sound at this point….. the bagpipe tracks seem more memorable than anything else. Overall sound quality is decent and an enjoyable listen. A nice start for Under Siege and interested to see if a follow up release has more folk/pipes……