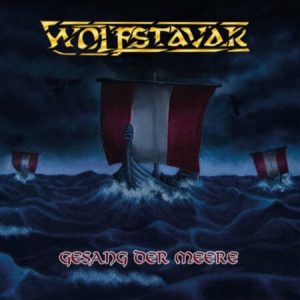 Folk metal warriors Wolfstavar hail from Leipzig, Germany and their debut album “Gesang der Meere” (Song of the Seas) will bring about visions of viking ships sailing the vast sea, dark forests teeming with goblins and feral beasts, and drinking in old taverns with your brethren after slaying foes in battle. My inner folk-nerd is immediately drawn to this bands appeal, for even the bands very name reminds me of the well-respected folk metal band “Wolfchant” whose music draws similarities with Wolfstavar’s debut.

Much of the music from Gesang der Meere is in fact similar to many folk metal acts I’ve heard in the past. Where Wolfstavar manages to find their own niche is in the sea shanty themes they imbue in tracks such as “Segel Hoch!” and the title track where I feel as if I’m aboard a ship with true warriors from the North. Both these tracks are high in energy and folk-infused melodies. However, I can’t help but feel that these high energy songs have been heard before and the songwriting ends up falling a bit trite on these and many of the other tracks throughout the entire album making them somewhat forgettable. Take the song “Naglfar”, this is the longest track located in the heart of the album and manages to span over seven minutes without really doing much to engage me as the listener. In the song “Und Wär der Main ein Großes Faß” the band tries to keep things fresh by throwing in the tune of “Auld Lang Syne” midway through the song, but it ends up coming across as rather random and falls flat in the end.

The band does manage to bring some highlights with variety in their song structures and the instrumentation they use throughout the album. Flutes, bagpipes, and even a harp are littered throughout. One of my favorite tracks is “Hugin und Munin” – a slower acoustic focused song where we take a break from the higher energy sea adventures and I find myself in a mystical forest at night, sitting around a campfire with my viking comrades as we tell stories of battle while listening to the sounds of nature around us. The vocals manage to go clean on this track and create a great sense of warmth. The song really providing a nice contrast between the rest of the songs on the album.

I think the band finds their stride on the track “Sonnenwende” which kicks off with some fantastic drumming, followed by a loose, jangly bass riff that gets me going. All of a sudden this ferocious growl comes in with these thick, chunky guitar riffs that truly make me want to do some headbanging. I think the conviction and passion in vocalist Sashcah Klemm (a.k.a. Malo) displays on this track show how dynamic of a vocalist he can be.

I think it’s important to acknowledge that if I knew a lick of German, this album might have been far more enjoyable due to the strong storytelling throughout, but from a straightforward musical lens, the band manages to keep the album solid due to it’s vocalist, and varied instrumentation. In the future, I would like to see the band take a few more risks to try and take their sound to the next level.