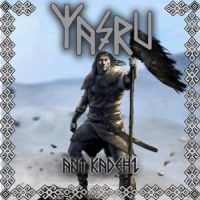 We don’t see a lot of music from Turkey come in for the site but when we do, they are some pretty stellar releases. The latest albums from Sabhankra and Khepra were both solid and the new album from Yasru joins the list. Entitled “Ant Kadehi”, their 4th full length sees Yasru now being part of the massive roster for Soundage (can you think of another label with so many folk metal acts?). Hailing from Istanbul, this 4-piece fuse traditional Turkish folk instruments ( I would say I heard a stringed/plucked instrument, flute and whistle although not sure which Turkish versions they could be) with a blend of doom and folk metal. Who they sound like to me you may ask? “Elegy” era Amorphis came to mind and even some Vojstrau (or maybe better when they were Wartha), Mael Mordha, Negura Bunget and Apocalypse Orchestra……a hard to comprehend blend but believe me it makes sense. The total album is just over 42 minutes in it’s 8 tracks (7 plus intro) with average track length of 6 minutes or so. I would say they tend to have a doomier sound than most folk metal acts (thus the AO comparison) but not to the point of a barely registering pulse. There is no blast beat tracks on here as mostly slow and mid pace really at any point with some hints of speed. I think one thing that might be lost is the fact that there is a lot of programmed key parts as they do not necessarily have a “keyboardist” per se……vocalist/guitarist/folk instrumentalist Berk Öner handles this as well and there is a foundation of keys in most of the album. There is a lot more of a symphonic feel to them then just doom and again the AO comparison is definitely warranted. From a vocal perspective, he employs a doomy style for most of the album with a mournful clean style in certain areas which helps with the feeling and diversity. I’m not sure how they pull these tracks off live with Berk handling so many duties but that’s another story.
The mix is decent with maybe vocals overtaking most of the music to me but overall a fun listen. Another one of those bands that are maybe not as well known but should be and 4 albums in and a new label should help in increasing their exposure. Once you get past the intro, I think you will find that Yasru has much more to offer than just a standard doom band and hopefully they can shake that tag so everyone can hear them for what they truly are….. a solid folk metal band sharing some of the treasures of Turkish folk music.