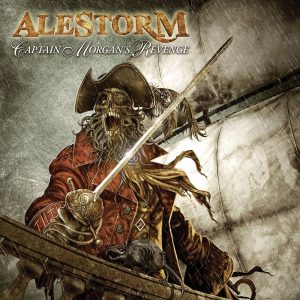 Many readers will no doubt recognize the name Alestorm, one of the most unique metal bands to gain prominence in the last few years. To those unfamiliar with the band, it is almost singlehandedly responsible for establishing the genre of Pirate Metal or, as the band styles itself “True Scottish Pirate Metal”. Even among the Pirate Metal sub genre, which has come to include bands like Running Wild, Alestorm has a very unique sound which is a combination of Folk Metal and Power Metal, with lyrics dominated by Pirates (who would have guessed). The 10th anniversary re-issue of their debut album Captain Morgan’s Revenge showcases the band’s greatest songwriting potential and their entire range of influences all in one album.
The opening track, “Over the seas”, is arguably the best song on the album. It is a very melodic, mid-paced track with very catchy, well-written lyrics, and a strong keyboard presence, highlighting its Power Metal influences. Unlike many keyboard laced Metal songs, on this track the keyboards don’t feel intrusive, and doesn’t overshadow the guitars. The lyrics are very blunt in their storytelling, and the rhyming scheme is very sophisticated. There keyboards and guitars do dance their dreaded duet during the solo, but in this case the contrasting solos sound as good on album as they no doubt did in theory.
The eponymous, “Captain Morgan’s Revenge”, increases the tempo and introduces some violin and accordions and has the same quality of lyrics, dealing with a cursed treasure hoard, giving the song the feel of a more traditional folk song. While not quite as good as the opening track, it remains a nonetheless enjoyable track and even has an accordion solo.
“The Huntmaster,” is another fun and energetic song. It has a strong metal drumming pattern that makes it difficult to resist headbanging. The accordions once again gives the song a distinct nautical feel to it. Compared to the previous tracks the rhyming scheme and lyrics feel simplistic, however it doesn’t negate the quality of the song itself unless the listener is primarily concerned with complexity.
“Nancy the Tavern Wench”, once again changes the tone of the music. The song is almost a full-fledged shanty with a catchy melody and simple lyrics about good company, good drinks, and flirting with wenches resulting in a song that is effectively eighty percent hedonism per volume and shows the more eclectic folk influences in Alestorm’s repertoire.
The next track changes the tone once again. “Death Before the Mast” is a very aggressive fast-paced number that sounds almost like it could pass for a melodeath song, a quality emphasized by Christopher Bowes’s significantly harsher, shouted vocals. Sadly the guitars fall short of matching the aggression of the rest of the song, and along with the keyboards make some parts feel a bit off.
Luckily the next track “Terror on the High Seas” makes up for the shortcomings of “Death Before the Mast” taking an even more abrasive drum beat, harsher guitars, deeper bass, angrier shouts, and even angrier lyrics resulting in a song that is just a manlier and angrier version of the previous track. The folk influences are less prevalent but the tradeoff is a truly evil sounding Metal song.
“Set Sail and Conquer” is a disappointment lyrically, coming closer to the more abstract lyrics and simplistic rhyming schemes some Power Metal bands are infamous for. Despite some high points the song feels a bit like a filler, which is surprising considering the vast ocean of songwriting influences present on this album.
The album soon returns to the original Folkish influences with another sea shanty “Of Treasure.” The lyrics and accordions make for a good drinking song, which one might rightly assume is inevitable at this point.
“Wenches and Mead”, goes back to the sound of the opening track with a soaring sound, shredding guitars and a catchy sing-along feel to it. What separates this track from the other folk influenced parts is the instruments don’t always fall away in favor of guitars during the chorus, meaning that the song fully embraces the rowdy potential of the accordions and keyboards paired with the purely hedonistic lyrics.
“Flower of Scotland” is a Corries cover that blends surprisingly well with the rest of the album. The accordions and keyboards once again gives the music the feel of a drinking song, and it is easy to picture it being sung by a crew of inebriated pirates at the top of their lungs in a tavern (the original song is usually sung by a team of inebriated rugby supporters at the top of their lungs in a sports pub). The main downside of this track is it feels like the instruments were drawn out a bit in certain parts in place of a solo, making it feel a bit long.

Clearly by no means is Captain Morgan’s Revenge a bad album, its broad range of musical influences simply makes it feel like it lacks consistency. While some bands try to find their sound across albums, Alestorm covers all the bases on one incredibly fun album. While they do overlap a lot with Power Metal they have a certain drunken rowdiness about their music that makes it hard not to enjoy. If you’re looking for Folk Metal that will give you the perpetual urge to mosh, headbang, or sing along at every given moment, take a listen to this album.