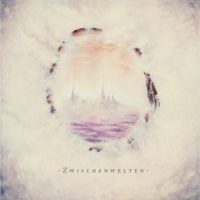 Listening to this album had me once again regret not taking German in high school. Zwischenwelten translates to, “between worlds”, in German, and this is honestly what the album feels like, with its mournful atmospheric outros, symphonic intros, and its elaborate bridges. While I was expecting more traditional folk-metal, what I ended up listening to was a highly atmospheric black metal release with scant folkish influences and a highly ambitious symphonic approach in certain places. Since I had some difficulty finding some of their previous work, and having been unfamiliar with the band, I decided to review the album with my expectations cast aside so as to be able to appreciate the album fully.
The first track, “…und es wird tag”, is very ambitious, clearly trying to be an epic and memorable opening to the album; however, the highly atmospheric intro is followed by a highly repetitive flute tune and then by an equally repetitive guitar lick with a sound so raw the overdrive practically bleeds through the speakers. It is worth mentioning that there is nothing wrong with this raw sound, in later tracks the raw sound will accentuate the sheer aggression of the music and the overdrive will make the solos, bridges, and intros sound very epic, but the first track sounds a bit too excessive and sounds less like the grand opening that Jörmungand intended it to be. The song changes its tone a few too many times and features a very ambient outro, which is actually done quite well and literally sounds like the wind moaning (when I said atmospheric, I wasn’t joking).
“Morgenrot”, is more a consistent track, with harsher black metal vocals and more conventional metal drum beats and breakdowns. If I understood the German vocals, I’m sure that the slow, grim tone would no doubt compliment the mood of the music, however the fast blast beats seem slightly awkward compared to the slow guitars and keyboards. Like the first track, there is another eclectic outro which sounds so sorrowful it might as well be the lamentations of nature itself.
Following the mournful wails of Gaea at the end of the previous song comes the equally ambient symphonic intro to, “Ruf der Vergägnis”, which soon gives way to a mid-pace growling crescendo as the drums come in. Even without understanding the German, I still appreciated the vocals on this track immensely since, instead of just growling in a typical black metal shriek for an entire song, the lyrics here showcase the full range of extreme metal vocals – from Death Metal growls to the aforementioned black metal screeches harsh normal vocals, making for a bel canto aria of black metal. The approach taken to this song seems almost like a power ballad, except with a lot more gut punch (picture a fist strapped to a bullet train). There is a slow, melodic solo which does show just how well the overdriven guitars can be executed.
The next track, “Zu hohen himmeln”, is an instrumental piece featuring mostly keyboards, under-tempo guitars with that grand overdrive air, and an overall stereotypically celestial sound.
“Werdegägner”, is in a similar vein to, “zu hohen himmeln”, with a symphonic opening and the repeating lick from the guitars. The slow but highly aggressive blast beats and the overdrive makes the song feel incredibly raw, which greatly augments its ferocity. Near the end the song becomes heavier and trails off without an outro for once (maybe this was intentional).
While the previous track lacks a mournful outro, the intro to, “In Hallen stummer Worte”, has the atmospheric part instead, followed with some flutes and violins in the background, making for the first genuinely folkish song musically (I can’t speak for the lyrics) and long symphonic bridge that feels very sad. The orchestral pieces are clearly done with a keyboard, but it takes a certain talent to play the parts of an entire orchestra on an emulator and still evoke emotions of despair.
Once again, the extreme vocals take on a range from growling to screaming in, “Dämmerung”, with a more conventional metal drum beat and muted overdrive guitars showing death metal influences while maintaining some of its rawness. However, there are still many tempo changes and the song still does sound like its taking an atmospheric approach.
“Neumond,” finally brings forth folkish qualities again, which, unlike, “In Hallen stummer Worte”, persists throughout the piece. There is also good interplay between violins and vocals, and even a combined clean and harsh vocals section which thematically might fit the piece lyrically.
The closing track, “Requiem”, has an almost Celtic violin tune that repeats throughout the piece, alternating with guitars and vocals. However, the violin sounds felt a bit awkward, and it would have been more consistent to use keyboards for the same effect. Overall, the guitars are slightly slower than the tempo at places to give the song that almost operatic “epic” feel. Near the end is an acoustic section and the ending once again has a strong atmospheric ending.

So in summation, if you’re looking for conventional folk metal, Jörmungand’s Zwischenwelten isn’t for you. It seems odd, given the outright black metal on the release and the symphonic tendencies that this album would be categorized as folk metal but as I’ve mentioned there are certain parts of the outros that have a romantic pagan wilderness feeling to them. Which makes me think if one understands the lyrics the folkish themes will become more evident, which is why I treated the review with an unbiased look at the music. Musically the album aspires to be great but is highly repetitive and very conflicted for the first few tracks, but it does even out nicely and has some folkish moments here and there. If you enjoy atmospheric black metal, symphonic music, or even if you like folk metal and just like a metaphysical depth to your music you will no doubt appreciate Zwischenwelten.