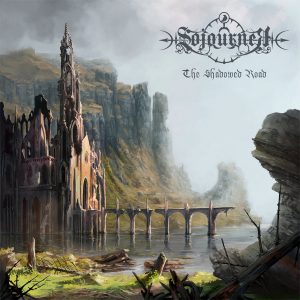 International act Sojourner has been on my folk metal radar since their debut “Empires Of Ash” landed a spot of my top debuts of 2016. While we anxiously awaited the new album, they released a killer cover of Summoning’s “South Away” from the epic “Let Mortal Heroes Sing Your Fame” album …. ironic I guess that I compared them to Summoning in my review of “Empires….”. Before the album we were also excited that there would be a live drummer joining the 2 Mikes, Chloe and Emilio in Riccardo from Atlas Pain from Italy…..even more international than ever. OK enough fluff……onto the review of “The Shadowed Road” for label Avantegarde and an amazing 2nd album from Sojourner. Are there many differences from the debut? Yes and no I would say……I would say “no” that their core sound and style has remained pretty much the same as the debut but in terms of overall synergy, strength of song writing and arrangement, performances and “risk taking” a resounding “yes”. The album is over 50 minutes in it’s 7 tracks so over a 7 minute per average and no intro piece which seems to be a rarity these days…..thankful that they have skipped the intro and gone right into the songs. I would say that they are probably folkier than they are given credit for with Chloe’s whistle and Mike’s piano/keys both integral parts of the tracks (Mike Lamb that is, who is also the guitarist). I would still say Summoning on some level is a good comparison although way less programmed and brooding with the addition of Riccardo on drums. A better comparable act would still be Duskmourn to me……however Sojourner is much more diverse in terms of the various parts and players. The interplay between Emilio’s and Chloe’s vocals for example… they have managed to harmonize Chloe’s ethereal and more confident style with Emilio’s death/black metal style which is absolutely mesmerizing to listen to. The choices of where to put whose style has obviously been a very important aspect this time around. Mike’s riffing and style has reached new levels of and can’t be overlooked including his keyboard work…..while still stylistically black metal based, there is more progressiveness in the technicality and delivery while still being heavy. Having a percussionist now to anchor down the battery with Mike Wilson’s understated and solid bass delivery is the biggest differentiating factor here with Riccardo’s addition……the choices he has made all work with relentless success. Every track is epic and has close to a soundtrack feel. Highlights are too numerous to list but if forced to I really dig the shortest track here in “Our Bones Among The Ruins” and the closing title track with the stark opening into the bombastic and build into the rest of the track. You really can’t go wrong picking any point to start from on here. To really push it over the top adding Øystein G Brun’s mix and Dan Swanö’s mastering should really tell you this is also a great sounding album with much more texture and tangibility than the debut. No sophomore jinx here….Sojourner is the real deal and even more so on “The Shadowed Road”. I would be shocked if this isn’t on everyone’s top 10 list for 2018. Great album.