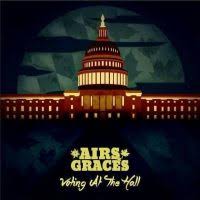 Airs & Graces hail from Germany and Canada and they play folk punk music with high energy and skill. Formed in 2012 they have six releases under their belt with “Voting at the Hall” being the newest and their first “official”, release. The album kicks off well with “Cards” , one of the albums best songs with strong vocals and some nice mandolin. “These Hands Master” continues in a similar vibe with a nice mix of guitars, drums, and mandolin and some good lyrics that include the name of the album. Both “Four Corners” and” Ringing of the bell “have excellent vocals and a nice vibe. “Turn her into the Wind” has a folksy feel with a nice anchoring melody played on the mandolin. “Throat “is a favorite for me because of the nice mix of instruments, a great breakdown and a short but sweet bass solo. “Refuse To Go” and “Devils Factory” is a nice one two punch of good punk and swagger. “Never Wanted Trouble “ has a nice folk vibe with another great mandolin melody and “Pull Me Out” features a sweet guitar solo at about the halfway point. This album for me is a bit of a mystery. I really should like it more than I do. The vocals are good, the lyrics are interesting and the instruments are played well. The problem for me comes around the albums midway point when everything starts to sound the same. After repeated spins I think my biggest problem is the storm of guitar feedback in every track. It makes it hard to hear the lyrics well and it makes every song sound similar even though they aren’t. I think it would benefit greatly from some clean guitars in a few tracks to break things up. Even so the album has some good songs and it has great potential for the future. The songs are somewhat short but there are fourteen of them and it seems a little long by the end. For me the albums highlights are “Cards” “These Hands Master”, “Throat” and “Pull Me Out”. Not a bad effort and shows great potential for the future.