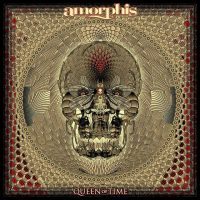 OK, I am not sure if there’s such a thing as 10 when reviewing am album, so I went with 9.5!!!
The long awaited Amorphis album is an absolute beauty. The band reunites with bassist Olli-Pekka Laine for this album, and this will be the first time that people will be able to hear their lyricist Pekka Kainulainen on the album as he contributes some vocals in Finnish.
The album has an overall more aggressive feel than previous albums with a lot more orchestral arrangements, vocals, instruments and dynamics. To put it simply, this album is almost like a juiced-up version of the red cloud album on steroids!!
This album does it all from vocals, solos, variety of male/female, clean/unclean vocals, a vast selection of instruments and music influences.
The album first opens with a very powerful song “The Bee”, with a mix of mesmerising melodies overlaying angelic like female voices in the intro and then alternates between clean and unclean vocals.
The second song “Message in the Amber” is more of a headbanger with lots of amazing background solos and an remarkable radical shift in vocals between choirs and hard-core vocals.
The third song “Daughter of hate” starts with a medieval melody (the kind you would hear in Power wolf songs) and offers a unique combination of instruments (some of which I’m not even sure what they are, but I could swear there was some saxophone involved) but capturing nonetheless. Halfway through the song, the choir portion kicks followed by a ridiculously fascinating slow solo and a commentary like vocals in Finnish. This song in my opinion is the best song in the album.
The next song “The Golden Elk” kicks in with an angelic opera intro (female vocals) followed by a great solo and an interesting background music work all the way through. Right about the mid portion of the song, there’s an amazing piece of music with an immense middle eastern influence (alternating between what I believe is oud backed with a great orchestral like female voice).
The following song “Wrong direction” offers a classic Amoprhis song with not much to brag about, well that’s what I thought till halfway through when Amorphis managed to pull a ridiculous Scandinavian solo that blew me away. Ironically, part of the lyrics says, “I should have seen it coming”!!
The next song “Heart of the Giant” starts with a slow guitar solo that smoothly transitions into a more hardcore music work, the song is mostly a mix of harsh vocals and a great music background, towards the end, an orchestral choir kicks in accompanied with a capturing guitar solo that wraps up the song in a welcomed ending.
The next track “We accursed” kicks off with an almost Celtic music into that fades into a more aggressive but solid music work and nice vocals all through till the end.
“Grain of sand” offers a solid track an as the rest of this album have a choir/music solo that never fails to surprise.
“Amongst starts” offers an alternation between male/female vocals in an effortless way. AND YOU GUESSED IT, they again pulled a crazy music solo halfway through with beautiful female vocals and solid guitar solo.
“Pyres on the coast”, the final song is a solid song , but probably my least favorite of the whole album.
To sum it all up , this is one of the best albums I have had the chance to listen to in 2018 so far , great job from Amorphis.