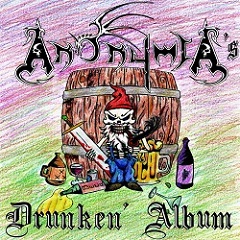 You should already know two things based on the name of the band and the title of the album……there are no named members of the band (anonymous get it?) and the tracks are full of booze laced lyrics and style. Anonymia is a relatively new act (formed in 2012) up in Portland Oregon USA with no former releases that I am aware of. The debut features a total of 14 tracks in the 1 to 5-minute range totaling almost 54 minutes. I think if you looked at the instruments being used (acoustic bass and guitar, violin, electric guitar and drums) you would probably get the sense that this is mostly acoustic based, and you would be right. So stylistically who are they like? Well think of alcohol fueled acts like Nordheim hanging out with The Dread Crew Of Oddwood and getting hammered and covering Bergsvriden and Svartby songs…….semi swampy, not too serious acoustic folk metal. I could go so far as to say maybe in some parts they sound like Goblin Hovel in their earliest stages but still a way off. I think there is some major potential here but first you have to get past the home made recording quality of the album…..and when I mean homemade, I mean an old tape recorder sitting in the middle of the room homemade. Believe me this all has to be by design as it easy enough to download Reaper or a thousand other programs to your home computer for recording and mixing music. As low fi as the recording is, don’t let that take away from some good stuff on here. I think a couple of tracks in you will kind of get what Anonymia are trying to do, some of the more “serious” stuff…..”Loosed Upon The Earth”, “Keeper Of The Cauldron” and “Fall Of The Pinehelm” are all examples of some better than average material. However, the hijinx certainly balance the musicianship here and that is on most of the tracks…..”All Hail The Beer Guarding Gnome”, “Run From The God Of Wine” etc….you get the idea. Voclas are screechy, death black metal with female and choral vox sprinkled in for good measure. I have listened to both the online version and the CD and there is a slightly better sound on the CD if turned up enough. I take it for what it is and expect a 2nd album to have better production value (or even a redo of this could be better received) I will give them props for at least trying to do some crazy folk metal here in the US which is sorely lacking as the Finns, Norse, Canadians, Russians and Aussies all crush us in that department. Major potential here and the start of a possible new wave of folk metal starting from the Pacific Northwest…..