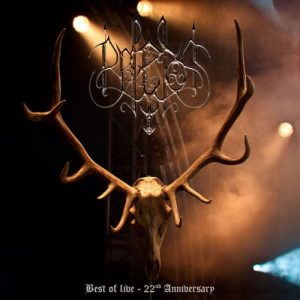 We all have those initiation bands that first introduce us to a genre of music of which we have no idea. Belenos, along with Menhir and Falkenbach, was the band that got me interested in the whole pagan black metal thing. Named after the Celtic god of sun, it’s put out a decent amount of records since its inception in 1995. Now what we have here is a compilation of Belenos’ most popular songs, recorded live in a studio in celebration of band’s 22 year-long history (I know it’s 2018, this was recorded last year). This record has a total running time 77 minutes which makes it a challenge to listen to. Fortunately, Loïc Cellier and his company of musicians perform these songs masterfully and they sound fresh and exciting.
The album opens with Aspedenn/Hollved Hirisus of Yen Sonn Gardis and they set the mood for the rest of the album quite well. I’m not a fan of intro tracks but Aspedenn does not feel redundant at all. As for Hollved Hirisus, it’s an impeccable encapsulation of pagan black metal. Tremolo riffs, mdi-tempo melodic passages and chanting are all in there. When Terre de Brume starts, so does my journey down the memory lane. For most of these songs, it’s been more than five years since I’d last listened to them. Le Déluge, Fureur Celtique, Morfondu were all subjects of my undue negligence, but no more. This being a “best of” album helps you find out songs which you might have over looked when they were first released. Gorsedd is such a song. It is one of the more melodic songs on the album and it’s an all-around epic. The album closes with L’Antre Noir, a great song where all aspects of Belenos’ music are present and manifested flawlessly.
Live recordings do not always wind up being this good but the sound quality here is impressive. Obviously, this was recorded in a studio setting, so it benefits from that but still the production is praiseworthy. There’s another reason why I liked that Belenos elected to do a live recording of their best tracks instead of just brushing them up in the studio and piling the up them in two CDs. To me, it is interesting to hear how songs from different albums recorded under different circumstances would sound together. This album gives you that opportunity and I was quite pleased to hear how amazingly these songs work together.
Overall, this album excels at summarizing why Belenos is a great artistic entity. The strength, the sound, and the songs all come together to give you a mesmerizing listening experience. If you’re not really familiar with Belenos’ music, this album is a great place to start. And if you’ve been an avid follower, this album will let you refresh the memories of the past as we wait for the new Belenos record to come out.