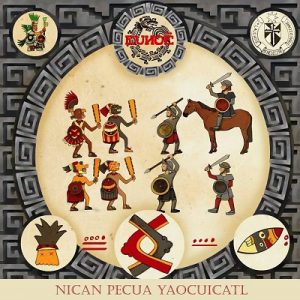 Mexico is probably not the first place you think of when it comes to folk metal. While there is a decent amount of death and black metal from there, sadly folk metal has not had any bigger acts come forth. Eunoë hope to change that with their debut release entitled “Nican Pecua Yaocuicatl”. Formed in 2012, Eunoë have put together 7 tracks on what I would call an EP or short album totaling about 32 minutes or so. I would say that when you think of Mexican/Central American folk instruments that guitar and some sort of percussive instrument would be on the list, but many would forget the primitive whistles, flutes and many others and all of these make an appearance here. This definitely feels like a first album as I don’t think they have a solidified sound yet and more so, the tracks suffer from a lack of direction. Without the folk instruments involved I would say they have a sound between black, death and thrash with their 6-member act. Don’t get me wrong….I like the idea of what they are doing and I think that Central and South American traditional music has been woefully unrepresented. Yes, Sepultura has done quite a bit but not really a folk band obviously while others like Vorgrum and Skiltron haven’t really delved into the ancient tunes either. I happen to love the sound of the wind instruments and can be used effectively if done right. Unfortunately, a lot of the folk instruments tend to sound out of tune more or less either with each other or the electric instruments. When it works it sounds promising…..”In Camanalli Ic In Nahui Tonaltzmieh” and the title track have the most synergy between the modern and traditional instruments and feels the most cohesive even with some missteps. While the songwriting and arrangements choices are things to work on, I think the overall sound of this release also hurts in being very inconsistent. Parts are very muted or way out of front and not blended in to create a tapestry of sound….it does have a homemade feel and could definitely benefit from a much better mix to highlight more of everything that is happening. To end on a positive note, Eunoë definitely have the style and ideas to make this a unique and entirely new folk metal style and beat everyone to the punch. There needs to be a lot of editing and thought into a future release as the plan needs to be followed thru with better execution next time around. It’s definitely worth a listen in hopes that Eunoë can focus and put something together on a next release that all the parts come together on…