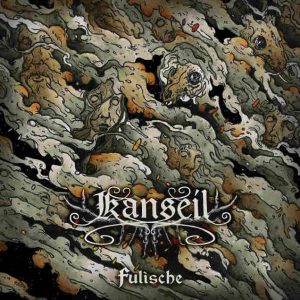 3 years ago we saw the debut album from Italy’s Kanseil with “Doin Earde” for their former label Nemeton. Have you had a chance to listen to it at this point? One of the more well rounded folk metal albums from 2015 with touches of numerous metal genres. Now on a new label (Rockshots) they have their follow up ready for release with “Fulische” coming this May. Any change in their sound with their new label? Thankfully no major changes but just more of the epicness from Kanseil. Their foundation is still anchored with guitar, bass, drums and vocals with folk instrumentation a plenty with bagpipes, kantele, bouzouki, whistle and rauschpfeife……not all at once but placed where needed. The lyrics are still in Italian of course and I think their musical style mixed with the Italian has a very genuine overall appeal. One thing you will never be disappointed by with Kanseil is the jumping from style to style on every track. From black metal to power metal, traditional folk and heathen folk, they are one of few bands that can vary from a typical style or sound and morph into other entities. Take first track (after the intro) “La Battaglia Del Solstizio” ……black metal and clean style vocals, staccato guitar, folk instrumentation, pounding rhythm section……and this is just the first track. In the albums 10 tracks and around 47 minutes you will get a little bit of everything. I still think Finsterforst on a basic level works as a comparative act but maybe a little Distoriam and Skiltron too…… all worthy acts to be compared to. I don’t know if the tracks are as catchy as I would like….while I love listening to it and appreciate what they are doing, nothing is really jumping out at me and standing out. I would like to think it is overall just really good so nothing needs to stand out specifically when it’s all this super. If you liked the last album then you will certainly not be disappointed by this one for sure and I think now with 2 full lengths under their belts they have cemented their place on the folk metal scene. The mix and sound of the album is right on point, with folk instruments sounding equally as powerful as the electrics, drums and vocals and everything finding space without being crowded. Glad to see a 2nd album from Kanseil after 3 years and also knowing that they have stayed the path, both quality and style wise…… good album.