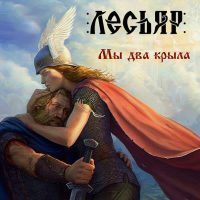 Lesyar’s album is a mix of so many things. Lots of re-recordings, amazing violins, flutes, fierce guitar solos, orchestra and punk-like background vocals, rap-like performance sometimes and a variety of background instruments that merge into what give this album an confusing, intriguing and a special flavor.
The confusion of this album lies in its inability to present a clear direction of consistency and new content, here are some examples:
Songs 1, 4 and 7 are re-recorded songs from the Butterfly temple days which are great songs but don’t seem to follow the flow of the rest of the album.
Song 2 has the best violin solos of the whole album in my opinion, the song presents very clean opera like vocals with a mix of flutes and guitar in the background. The song is a re-recording of a Nevid song before their split.
Song 3 is also a re-recording from a Lenar Dellett song.
The cover of the Whisky bar song (originally by the doors) was a good attempt to reperform the song with a metal touch.
Overall, the album shows lots of promise in terms of what the future might hold for Lesyar but without new content to evaluate the progress of the band as well as the lack of clear direction, genre or flow of songs, it’s hard to judge.