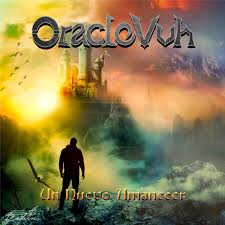 OracleVuh proves that folk metal truly is to be found anywhere in the world. Five guys from Guatemala release single ‘Un Nuevo Amanecer’, after previously releasing a full album. Only one track on this single, lasting almost 9 minutes. One look at the members and their instruments and you can tell that folk metal truly is the band’s style. A full time violinist and flute player no less. Let’s hear it.

The band are clearly on the softer side of folk metal. Happy melodies, clean male and female singing are what the OracleVuh is all about. The riffing is distorted, but rather simple. In fact, the entire song is rather simple. Not many changes of pace, not many different vocal aspects. In a song of this length I would like to hear some more variety. All the instruments have their own place and play a part. There is a rather long instrumental part that I like fine. Several guitar, keyboard and violin solo’s bring out the band’s quality. And yet, quality is exactly the aspect that these guys should grow in. The solo’s are okay, but not great. The harmony singing part, same story. Song writing: ditto. If you write such a long song, how come you still can’t figure out how to end it and decide to fade away? That wouldn’t be my choice.

That being sad, the melody does stick in your head after a while. There is hope yet.