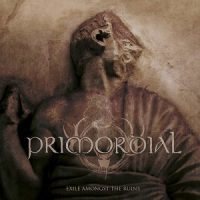 Every year has an album that will be fraught with controversy. Coincidentally, last year’s (my perception anyways) was the latest from Ensiferum….why coincidentally? Well, Ensiferum and Primordial are on the same label and I’m sure someone out there is trying to make a conspiracy out of Metal Blade “unfolkmetalizing” bands on their label….watch out Crimfall, TYR and Amon Amarth. So, what a band can’t evolve into something bigger and better? Primordial have done just that with every successive album….proof wise “Where Greater Men Have Fallen” was album of the year for us in 2014 and yes, a Metal Blade release. “Exile….” continues where that left off at in Primordial making just great metal music. For everyone hung up on it having to be a pagan Primordial or none at all then you may have to start listening to other bands as this is more straightforward and accessible an album as they have put together. The elements are still there but less shrouded in mystery and being more in your face……riff wise, lyrics wise and overall style just seems to be more to the point. No pulling punches and potentially overdone buildups…..right to the meat and skip the appetizers. The tracks are still way above average length (8+ per track) so no 3 minute drop in the buckets but floods of heavy (albeit I feel simpler) tracks. The style I feel of the writing is built on more memorable riffs leading to more a more anthemic album overall. Take “To Hell Or The Hangman” as the perfect example……probably the most accessible track they have put out there…..not commercial by any stretch but I think has more crossover appeal than almost anything else they have done. Other tracks like the somber “Stolen Years” and the title track have the same wider audience potential. The “classic” Primordial sound is still present of course for a majority of the album which teeth smashers like “Upon Our Spiritual Deathbed”, opener “Nail Their Tongues” and the rest. I feel the have just refined what they have been doing into a more focused and less busy album but still has the integrity of all things Primordial. The overall sound is full and warm with I think the best guitar sound they have ever had with a slightly hazy rhythm backdrop. AA Nemtheanga is in classic form, both in command and ferocity while incorporating an expanded range of emotion which is lethal in places. I may be in the wrong when it comes to the potential “controversy” but I certainly don’t think I am wrong in calling this another great album from Primordial. Looking for just a great metal album? “Exile Amongst The Ruins’……there you have it.