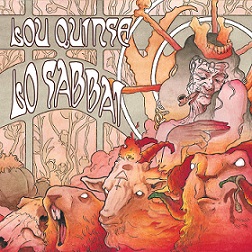 Shame on me for not being super familiar with Lou Quinse but in my defense, they haven’t done anything new since 2011. Until now that is. Their 2nd full length “Lo Sabbat” was just released on May 8th via their label Sliptrick and what a face smashing “comeback” it is. Before plunging into it I jumped back in time thanks to the magic of the internet and refreshed my memory of their style from the first self-titled EP from 2008 and debut album “Rondeau De La Forca”. Yes I remember now…….super up tempo, high energy folk metal in the vein of Trollfest, Kanseil, Svartby, Distoriam, etc but not as swampy so I would say and combo of Grimner and Finntroll might be the closest comparison but not super perfect. There is a lot going on with no fewer than 6 members in the band from a vocalist, guitarists, bassist, and drummer to folk instrumentalists playing flutes, hurdy gurdy, whistle, accordion and pipes. Yes it is very cacophonous but in the good way that makes you want to listen to all of it. In the 12 tracks totaling 46 minutes (yes less than 4 minutes a track average) there is a wide variety of tracks from some more thrashy/crossover to more folky with a whistle, flute and pipes etc being the main riff driver. Tons of backing choral vocals, blast beats and breakdowns….I’m sure you Celtic punk lovers could get into this too. Vocally, it varies from deathy to black metal but all works and I would say they lyrics are in Franco Provencal (language spoken in parts of France, Switzerland and Italy)….as they are based in Turin this seems to make sense since that is right in the middle of those 3 countries coming together in the NW of Italy. There are a couple of tracks that top 6 minutes (“Lo Boier” and “La Marmota”) and even with the longer lengths, they still maintain high energy and speed throughout. The only downside that I can find is that after listening a few times I’m not necessarily drawn back to listen more and more….while it is catchy, it is not one that keeps reeling you back in but I am still blasting through it so at least I know it has some staying power. It has a nice overall edgy sound to it with enough of a roughness to it to appeal to the punk fans and definitely enough metal to counteract all of the folk stuff. A great all around album filled with tricks and treats for a multitude of listeners of all styles.