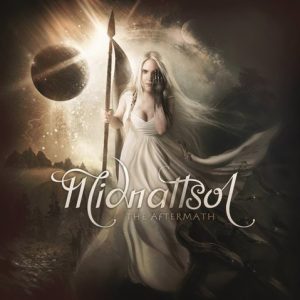 Midnattsol is an interesting band; though I had always thought of them as a symphonic metal band. Advertised as playing a blend of Symphonic and Folk Metal, since they are a supergroup and have had a new vocalist join their ranks it might be interesting to give them an in depth listen. Before this starts, let me just say Symphonic Metal as a genre has a broad range of possibilities for the quality of a release. There are many good Symphonic Metal releases, but because of the nature of the genre, there is a danger of veering too far in a certain direction and then getting unnecessary flak for issues like dropping certain musical influences, or centering several songs around one instrument. In the case of Midnattsol’s new album The Aftermath, one finds that both to be the case.
First off, to individuals unfamiliar with traditional metal drumming patterns or riffs, this release will no doubt sound like very sombre rock. The guitars seem to be almost universally a background instrument, rarely getting any exposure. Though the guitar riffs themselves are good, they lack any real aggression. There are some exceptions to this – the guitars get more abrasive in certain songs such as, “Syns song”, “Herr Mannelig”, and, “Aftermath”, but even then it’s mostly in segments and not consistent. The heaviest the album really goes is the song, “Evaluation of time”, which remains one of the high points of the album, even then it it only really gains momentum late in, after a lengthy and very melancholic intro. As for folk metal elements, aside from “Herr Mannelig”, and “Vem kan segla”, which themselves only have subtle folk influences, the album drops folk instrumentation and songwriting in favor of traditionally influenced singing. There is a bonus track Eitrdropar which is outright folkish, down to the instrumentation, and was a joy to listen to, but the rest of the album seemed to have departed from a folk sound for the most part.
As mentioned previously, the album is clearly not folk metal and isn’t exactly traditional symphonic metal either. Instead, the album is eery, melancholic, and sombre, seemingly conforming more to the Gothic Metal sound the band is credited with helping establish. Most of the album seems to center around the vocals, which are actually quite beautiful, making me wonder if Midnattsol is meant to be a vassal for Carmen Elise’s singing, given that it is a supergroup. The music, if judged by its merits alone would have earned the album a higher score as the album does have a certain delicate sophistication about it, but this review is based upon the album’s folk metal qualities. And despite the undeniable elegance of the vocals and the moodiness of the keyboards, the album simply doesn’t have the aggression of metal or obvious folk influences (but it is still there). This album isn’t for everyone, and even if one is used to Symphonic Metal, the sound takes some getting used to. But regardless if you aren’t picky about your music, the Aftermath holds a distinctive elegance that sets it apart from a lot of other Symphonic Metal band. As long as you know what to expect, the album shouldn’t disappoint.