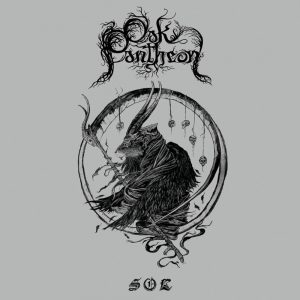 When last we left Oak Pantheon was 2016 with the release of their amazing album “In Pieces” which showcased their unique blend of Minnesota blackened metal. Along with state mates Amiensus, they are at the forefront of extreme music from the land of 10,000 lakes. Now 2018 shows a different side altogether with an acoustic EP entitled “Sol”. Clocking in at around 23 minutes, it features 6 songs averaging 3-4 minutes in length. I would like to say that going acoustic has been a pretty cool idea for some bands when it works…..the last couple that come to mind are Baldrs Draumar, Grimner and the new Winterfylleth. Does it work in the case of Oak Pantheon? I would say both yes and no…..sorry to be vague but read on please. The tracks are mostly acoustic guitar as the primary instrument with I would say some synth/programmed instrumentation and percussion which is subtle and works well. I wouldn’t necessarily think that you would say this sounds like Oak Pantheon doing acoustic as the song arrangements and style are I feel entirely different. For example, if you listen to “Fan Fryslans Ferline” you know it’s Baldrs Draumar doing acoustic songs. This is such a departure from their established sound that it’s hard to sometimes find them in the tracks unless you jump back to some of their older material like “We Will Tear Down The Gods” from 2012’s “From A Whisper”…..an acoustic track mixed into the entire album. This is what I think works more successfully is when it is an isolated track here or there and maybe not as an entire release for them. Don’t get me wrong as I do happen to enjoy the release overall. My biggest issue I have is in the vocal department where there are spots where the vocal choices seem to have been somewhat forced or just don’t seem to work and the mood gets derailed for me. A few death/black metal vox would have made this like the 2nd coming of Agalloch and who wouldn’t want that to happen? This is absolutely still a decent release as both Tanner and Sami (Oak Pantheon’s 2 members) have been crushing on everything up to this point. I just think that maybe more of the Oak Pantheon sound and style needs to be on here to give it a little more intensity and familiarity. Sonically, everything is put in its proper place as far as instrumentation and vocals go. A decent go at going acoustic for Oak Pantheon and definitely worth checking out….even if it really is not as recognizable as being them.