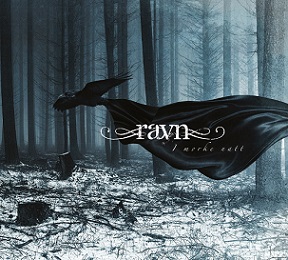 There are people that like Quentin Tarantino movies. Because they are violent and bloody and rude. And there are people who like Disney movies. Because they are warm and nice and have a happy ending. In music, it’s not so different. Even within the confinement of folk metal, there is a huge variety of music to choose from. Ravn is the Disney variety, whereas I am more of a Tarantino kind of guy.

Debut album from Norwegian Ravn brings you proper folk metal. That is to say, lyrics in the native language, distorted guitars and a melodic approach to music. Not trve in the sense that the band applies all sort of flutes that the Vikings have invented thousands of years ago. But folk metal nonetheless. Following the Disney story, the music does have a fairytale feel to it. Again, not the kind with evil creatures eating innocent children. More the kind that says the world and the people in it are basically good.

Is it an album, or is it an EP? I am not sure, with the music running to just over half an hour. No matter. What does matter is that Ravn has a clear style. Female clear vocals, not obvious in folk metal. Folky melodies, no double bass, moderate speed. In truth, not what I would normally listen to. Just listening to the quality of the song writing, it is okay. The songs are different enough, the guitar solos as well. The singer is as capable as the musicians. Given time the album will grow on you. A bit. It doesn’t add up to being great. In order to be great, most songs should get you either banging your head or otherwise get you thinking about life and trolls and Odin and the wonders of nature. But it doesn’t. It doesn’t grab me in any way. And yet I think Ravn makes decent music. Think of it this way: the elements combined are less than the sum of the individual elements. So, not enough synergy to stand out. Too little energy, too little surprises and for me not bloody enough.