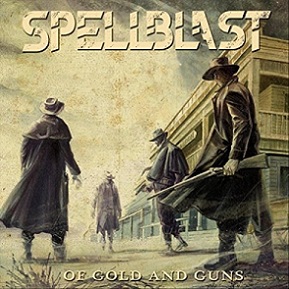 A decade ago we would fight over the right to write the review about a new Spellblast release. Times have changed. Spellblast has changed. Once upon a time the band was on its way to greater glory. With their original mix of power metal and folk metal, they were the sweethearts of both camps. Since then, the line up has seen multiple changes. It would be an understatement to claim this hasn’t improved the band’s quality and fame.

On only the fourth album of this Italian combo, that has been around for almost 20 years, there is simply not enough energy to go around. It sounds like the band has spent the last four years trying to come up with inspiration, direction and a reason for its existence. Eventually the inspiration has come from the Wild West. The direction style wise is a sort of metal that won’t offend anyone, but won’t excite too many people either. And the reason for existence has evaporated.

The start of the album for most listeners will also be the end. Listen to the current singer ‘Dest’. What kind of name is that anyway? Really, only singer Jonathan Spagnuolo ever took Spellblast to a different level. Maybe technically not the best singer, but he stood out all the same. Dest stands out, albeit for the wrong reason. In opening track ‘Tex Willer’ he is just off key all the time! I for one was shocked. How on earth can you start with a track like this? The song itself is hallway okay, but the vocal performance is just inexcusable.

It took a lot of effort to listen to the rest of the album. Truth be told, if you listen to the album often enough, the theme of the wild west sort of clings to you. A song like ‘Billy the kid’ is not bad. It’s not good or interesting, though. Listen to ‘Sitting Bull ’and try to stay awake. If you succeed, you may like the album as a whole.

Spellblast have turned into a non-descript rock slash metal band with a poor singer. This doesn’t guarantee a place on the main stage of Wacken or Graspop, your reviewer ironically remarks. In fact I think this album makes sure the band doesn’t leave their home country for years to come.67