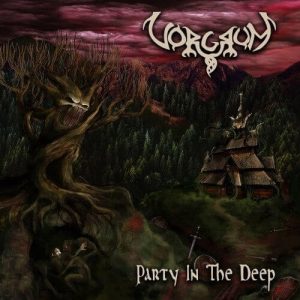 Name your favorite folk metal band from South America and many would say Skiltron but there is no doubt I would say Vorgrum. One of my favorite albums from 2015 was their epic “Last Domain” which showed off their hyper speed approach to folk metal. Fast forward to 2018 and the release of “Party In The Deep” which picks up where “Last Domain” left off and adds a bunch of new stuff. Featuring 13 tracks and totaling around 43 minutes, “Party In The Deep” shows more diversity without sacrificing the heavy. Sound alikes? Well I would say the most obvious is Svartby and any of the more out of control acts like Trollfest and Nordheim. They combine the intensity with the catchy more so on “Party….” which is tough to do but when done right it’s stellar. They touch on a bunch of different styles here from more piratey stuff (“Beer Island” for example) to darker (“Legends Of A Beast” “Dragons Breath”) to full on funky party (“Dancers Of Eternal Blackness” and others)…..and they all still have the Vorgrum sound to them which is pretty groovy. I would say overall they are less stuck in having to be brooding and have opened up the floodgates to everything and anything goes. Being a 4 piece will have you scratch your head at how they are pulling off all of these folk instruments throughout….the simple answer is guitarist Folter swings the accordion around while every other instrument heard presumably is via keyboard/programmed by other guitarist Patrick. I would naturally assume live they play with a backing track or not at all which would make most of these tracks 10 times heavier. The tracks are all under the 5 minute mark (including some instrumental tracks) which definitely works with their style and really that’s all they need to get the point across. I wouldn’t necessarily say this is a huge leap forward for them as they were already pretty killer to begin with but in terms of showing off some other parts of their arsenal now, they have absolutely progressed forward. The sound is solid all around…equally heavy, brutal and clear. Yes South America has it’s share of killer metal acts from all genres but as far as folk metal goes, for me Vorgrum takes the crown……and “Party In The Deep” proves my point. Killer album.