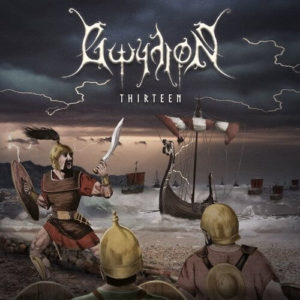 Portugal’s Gwydion are returning to once again raid the Viking metal shores with their 4th full length entitled “Thirteen” this July. Not sure of the reasoning behind the title as it is not their 13th album or number of album tracks but that is a mystery to solve some other time. Although being in existence for over 20 years, you would think that 13 albums would possibly be achievable, and it has only been recently (since 2008) that their 4 full lengths have arrived. This time around they have 12 tracks totaling about 53 minutes on the new album which will again be independently released. My information is that this is a concept album based around the age of the Vikings (2nd track “793” is a giveaway as this is the year that most Viking age activity is thought to have begun) although it does not really necessarily have a concept album “feel” to me. I always want to use Amon Amarth as the “sounds similar to” band for anything that is vikikng metal related and that is fair on a cursory level, but I think a little Varg or Ensiferum sound right as well. I also think that new act From North is a very good comparative act on a number of levels…..not really super melodic death or power metal but somewhere in between. This somewhat vague idea of what Gwydion are all about could be their Achilles heel so to speak. They are 6 members in somewhat tradition metal fashion (vox, twin guitar, bass, keys and drums) so no folk instruments to speak of but the keys will help fill that void. I think my pre-conceived idea is that they should have an overall heavier sound and that could be the way it is just mixed. When they are heavier and more up tempo (“Balverk Warfare”, “Shield Maiden’s Cry” “Oh Land Of Ours”) I think they are at their best……blasting thru the song, relentless riffs and vox and the right amount of keys. However, a majority of the album tends to kind of keep it safe and not stray to far either into heavier/death metal or into more power metal/progressive metal. This commitment to one path or the other I think is what hurts this release. Is it good? For sure it is a decent album but when you hear what other Viking metal oriented acts have done this year so far (Grimner, Last Legion) Gwydion would have to up their game. “Thirteen” is still an album worth checking out and has some good things to offer but still lacks some of the focus and direction that I think they need to be more successful going forward.