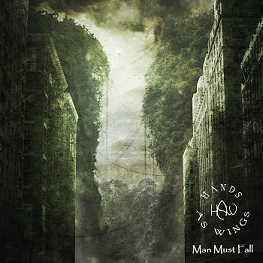 First off, no idea what the band name means, and I won’t even try to hazard a guess. This duo from Greece have been in existence since 2015 and this appears to be their first official release. Independently released, “Man Must Fall” offers 4 tracks with a running time about 21 minutes or so. There are no folk instruments listed or audible here if there are so I would question whether or not this is folk metal but I do think they sound like some of my favs on some level. The first two bands that jumped out were a mix of a less heavy Heidevolk and a less medieval based Apocalypse Orchestra….a mix of pagan style and some of the doom mixed in for good measure. The tracks are primarily based around the guitar riffs which are all catchy in each track and most of all, pretty memorable. Building upon that would be the primary vocals and choral vocals which also are solid and easy to grasp what is going on. With only 2 members you only have those viewpoints as far as songwriting goes and I could hear where this style could start getting a little repetitive since there are not major deviations from their basic sound. The tracks are mid paced for the most part….not straying into blast beats or up tempo so again there would be more reliance on the riffs and vocals to carry the tracks along. The lyrics are in English which is a bonus and you can sing along with them via their Bandcamp page……subject matter ranges in between nature, magic and mythology in my quick interpretation. The highlight for me is the last track “Dreams Down Deep” with a nice build into the rest of the song, harmonized guitars and killer lyrics (Lovecraft based ones always are). I would say if one word would describe this initial offering from Hands As Wings it would be “promising”. While not super adventurous in terms of songs diversity, I like their semi-retro vibe and not putting out something that is overdone. Possibly adding some new elements/tempos and some folky instrumentation would go a long way in getting more attention. For now, “Man Must Fall” is a pretty successful first go at it with a decent mix and production with songs that hit the mark. Hands As Wings is definitely an act to look forward to a next effort for sure.