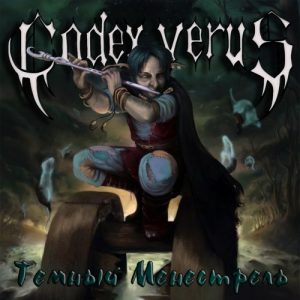 Keeping an open mind is one of the must haves for a reviewer. Personal preferences like style, vocals, speed and so on, shouldn’t influence your opinion too much. So, as a first time listener to Russian combo Codex Verus, I haven’t listened to their previous work. Just focused on listening to the musicians, the songs, the production and the overall feel. And listening I have been to the single, again and again. And I am still waiting for the moment the songs grab me by the balls (I was gonna say ‘hair’, but lacking that, I had to become somewhat rude).
Two song then, both between 4 and 5 minutes. Clean vocals, moderate speed, folk elements mainly come from the bagpipes. In fact 3 of the 5 members are supposed to play the bagpipes. Then how come I only hear these striking instruments after the fourth time listening? The answer, I’m afraid is simple. There just isn’t enough energy going around. With a running time of less than 10 minutes Codex Verus should make their stamp on the world. Show us your style. Amaze us with your approach to metal. Be the band we wish had been around for the last 20 years. I for one can’t find any of this. Not even the industrial angle the band’s website promises. This single doesn’t make me want to listen to their earlier discography. Have they been better previously? In that case, good for them. But as we all know, your popularity is only measured by your latest action. And I would rather go shopping in the Action than to listen to this single again.