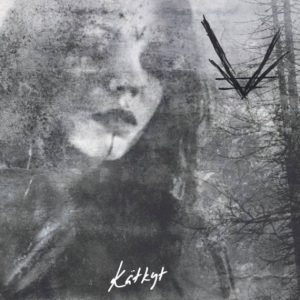 Vermilia’s is one of those artists that, from its name alone gives away it is a solo effort. There are two types of solo albums: those that serve as a one way trip on the ego express and those that are meant to showcase the natural evolution in sound that an artist wants to take without changing the sound of their band. Now, prior to sitting down and doing some background research for this album, all I knew was Vermilia was a pagan metaller from Finland. Since I hadn’t heard excessive hype or promotion, I had no reason to assume this album was the first category of solo album, and a listen to this album confirms this must be the second type of album as there are some pretty bold deviations from traditional extreme metal on it.

The opening track, “Äiti Maa”, has a very atmospheric feel to it to the point where its ambience sounds almost like gothic metal. The riffing sounds like it was played in a cathedral with an echo to it. Vermilia’s voice fits in perfectly, being even more eerie than the overall ambience of the piece. The main problem here is the notes are highly repetitive and feel like they were written at the last minute, and there is also this nasty tendency for the guitars to just evaporate completely when the vocals start. There are some growls that are a bit deeper and harsher than traditional black metal rasps, so the song definitely feels even more ominous, it would just be better if the guitars had more variation and presence.
As the song transitions to, “Vedetsa vieraan”, most of the former issues were no longer applicable as the song kicked into a speed drumming and blazing riff frenzy. The heavy drum beats and guitars dominate the instruments, and the contrast between drum and guitar is better between leads. On this track, the same ambience is there, but this time, Vermilia switches her sweeping soprano for a tone of voice that reminds me of symphonic metal bands like Epica. The resulting sound is very spooky compared to the last song. Once again, there is the issue of Vermilia’s voice somehow having the power to spontaneously mute the guitars, but overall, the solo was memorable and the guitar leads were varied so this time the presence of guitars feels intentional.
The next song, “Haudoille”, follows this same formula. Immediately after is a track called, “Poissa”, a high point of the album. Compared to the other songs on here “Poissa”, is hell’s fury itself, boasting aggressive guitars and inhumanely fast riffs with the vocals to match. The growls on this piece sound deeper and much more brutal than I would expect normally from bands with black metal influences. This song will genuinely cause you to start headbanging uncontrollably. It’s just that sort of song. The guitars do feel a bit light later in the piece, considering the rest of the approach, but the shredding solo near the end compensates for this. Do not think that this song deviates that much from the sound of the album, however. The same chord structure is still subtly present, and the sweeping majesty of the present throughout the album resurfaces at the finale.
After the previous gem, the album goes from folk inspired songwriting to flat-out folk. The next track, “Saataja”, is a traditional song delivered as a very Nordic sounding chant. It has the feel of a dance and it probably was derived from a folk dance (at least from a notation perspective). When the guitars kick in, they have a nice catchy feel to them and will most likely make you want to sing along when the chorus repeats. The song is fun and peppy; however, make no mistake – it still is a metal song and has a somber feel to it. There are virtually no problems with this song. One could say something about the quality of the breakdown, but that would be pedantic.
Following, “Saataja”, is “Maisema”, which starts as an instrumental ballad before the guitars come in full force alongside the instruments. It follows the same formula as “Saataja”, except, instead of a chant the vocals are simply delivered in a traditional way. It’s definitely as fun as the previous track and can probably be used as an audience participation song live.
There is nothing else to be said about the other two songs that haven’t been said already. Both of them have fundamentally the same approach and only vary in their delivery. The main difference between the two is that the closing track changes up the intro for a more symphonic sounding one and maintains that vibe throughout the piece.

So overall, the strongest point of this album is the vocals, both Vermilia’s “celestial” soprano, and the sheer fury of the harsh vocals. Both have unique qualities that set them apart from a lot of their contemporaries, and I think in many ways the harsh vocals fit an album like this a lot better than just straight up black metal-inspired vocals. The other strong point is the ambience. They pull off a very ominous sound which pairs great with the vocals. The main issues of this album are it feels repetitive at places and the guitars can feel a bit watery, not to mention Vermilia’s hypnotic control over the volume of the guitars with her voice that makes the contrast feel off (like a bardic Dracula, trill and the wolves go silent). Another minor issue is that the bass is almost indistinguishable, which can be a turn off for some but it doesn’t take away from the album. While some black metal is by nature repetitive, on this album, the repetition can get distracting at places. If you like atmospheric black metal, like Nordic folk music, and don’t mind a little repetition, this album would be something you don’t want to miss. If you enjoy good vocal work, it will be difficult not to become enamored with all the singing styles present on this album, especially considering the central role they have on many of the tracks. Check out the album when it is released later this week. Also check back for any further coverage about the album.