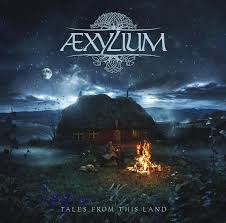 Two years after releasing their debut EP, Italian Aexilium is back with their debut full album. Back then, I was critical about the quality, especially of the singer’s capabilities. Let’s see how the band has evolved.
First thing to notice that all three songs of the EP have made it to the album. Seeing that the EP was lacking originality and quality, not a good start. That’s just lazy. As with the EP, the biggest issue with this album is the singer. Not enough power in his clean singing. Not the skill to maintain the right note. Pretty basic, but he just doesn’t get it right. Funny that his grunt is actually rather good. In the scene there are plenty of singers I would like to present their clean vocals more. With Aexilium, it’s quite the opposite. With a harsh voice like on ‘Into the jaws of Fenrir’, why use your clean voice at all? To be honest, he has improved compared to the EP, but still has a long way to go in order to help the band reach higher ground.
As the album progresses, the influences become clear. It wouldn’t be unfair to label the music as power folk metal. And thus, Elvenking comes to mind. No wonder, since the album was mastered by Simone Mularoni, who has also worked with Elvenking.
Somehow the album doesn’t stick in your mind. Perfect example of this is ‘My favourite nightmare’. Very accessible, nothing to complain about, nothing to brag about either. During gigs, I am sure the fans will sing along. A very simple song though.
Last song ‘Radagast’ starts promising. Maybe a nice instrumental farewell on the album? But, alas, after a minute the singer joins the band. Immediately the energy fades away.
Nice to hear some old school folk metal, using bagpipes, flutes and all. The thing is, that on it’s own is not enough to conquer the world. In fact it’s not even enough to conquer the niche that folk metal is. For starters, keelhaul the singer and bring someone in who is able to raise the level of song writing. Then play a hundred gigs and learn from the feedback that the punters give you. Or don’t do any of this and fade away unnoticed.