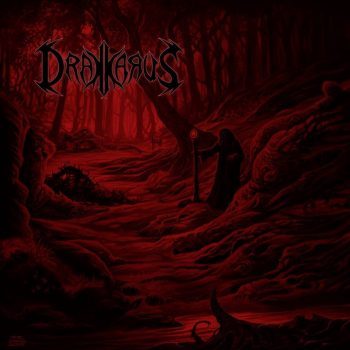 I hope you have noticed the amount of epic releases from Australia over the last few years including acts like Claim The Throne, Stormtide, the epic Valhalore (one of the top debuts of 2017) and best of all, my beloved Trollgasm. Fortunately, even with their all too soon end, Trollgasm fans can now rejoice with a new project from the brothers Read (Dani and Tim) along with some other fellow warriors with Drakkarus. While Trollgasm is definitely a great starting point to describe them sound wise, they are definitely a different act and have more of a straightforward Viking metal sound about them with touches of Ensiferum and Amon Amarth. If you are at all familiar with the Trollgasm catalog, then think of the style of “Heed The Battle Call” and you have a pretty good idea of how the tracks feel to me. They have put together 8 tracks totaling around 38 minutes or so on their self-titled and self-released debut which is hitting probably at the time you read this (guessing via the band direct or a Bandcamp page) Dani and Tim have swapped roles, so to speak with Dani handling vocals and Tim jumping on bass. While I am a huge fan of Tim’s prowess on vocals in numerous projects, I think Dani’s approach with a deeper resonance and booming growl works much better in this case. The tracks range from 3:30-6:00 minutes in length with thankfully no intro taking up space. The tracks are not super technical or super over the top riffs wise but overall are strong and easy to get into. Guitarists Brett Pigram and Michael Krucler along with drummer Troy Ervine all perform admirably in their respective roles and play the appropriate parts. Looking for a folkier tune or two? Album closer “Tales From The Mead Hall” for sure is one and there are bit of keys throughout and folk instrumentation is here and there. If I had to pick out a stand out track (they are all good) but I really dig “Ride Toward Glory” and “Out Of The Forge”. I think the production and mix are decent but could have had a little punching up as it could sound a little flat in areas and maybe a few more fixes here or there musically also but not big deal. Overall, a solid first effort for Drakkarus and one which has only one direction to go and that is up from here. Solid debut.