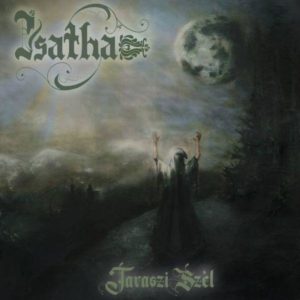 The EP seems to be a dying breed for the most part. The digital age has made it easy for bands to release tracks at will and not necessarily package them in a less-than-an-album format. Thankfully Isatha has put a few tracks together on a bonafide EP entitled “Tavaszi Szel” (I will say it translates to “Spring Wind”) from their native Hungarian. Hungary is most notably known folk metal wise for Dalriada, Kylfingar and Niburta amongst others so it is nice to hear another act from the Heart Of Europe. Being in existence for over 8 years now, you would think that Isatha would possibly have more releases at this point (1 full length “Erdei Regek” from 2013 and now this EP) but tis the way things are nowadays. Featuring the obligatory intro, 1 re-recording and presumably 2 new tracks “Tavaszi Szel” totals in at just over 16 minutes and is independently released. Unfortunately, I don’t have the first album to compare or hear what sort of progress they have made in 5 years but on it’s own this is a nice and solid release. My impression from our previous review and information directly from the band is that this material is heavier than before. If so, Isatha has made the right decision for my listening tastes as they have enough folky and heaviness to appease my ears. As a 7 piece unit with male and female vocals, flutist, guitar, bass, drums and keys I was reminded of a little Grai, Brezno and Zaria as similar style artists and maybe even a little Moonsorrow or Amorphis….nothing wrong with those comparisons. The intro is nothing spectacular but it does lead into the 2 presumably newer songs the title track and “Feast With The Fallen” both which are killer featuring heavy growl male vocals juxtaposed with female vocals at the forefront along with the woodwinds, percussion and electrics filling in behind. Lyrics all appear to be in Hungarian despite the English title there which still works rather well despite not really knowing the content. The EP closer is a revisit to the track “A Vervoros Eg Alatt” (“Under The Blood Red Sky”) which fits right in with presumably a heavier version to close out the EP. The best thing about this EP is I definitely want to hear more of what they have to offer so a great EP indeed. The mix is well rounded with attention paid to the folk instrumentation and female vocals specifically to make sure they cut thru the heaviness of everything else. A nice quick taste of what Isatha has to offer and definitely looking forward to a new release in the near future.