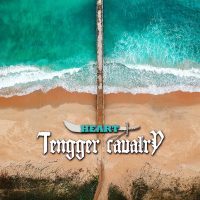 At first glance Tennger Cavalry’s genre of Nomadic Folk Metal sounds like a novelty idea. Indeed, any type of unconventional folk metal might seem that way to people like me who are so unyieldingly supportive of a very strictly defined music sphere. However, earlier this year, I saw Orphaned Land live and I discovered just how well Eastern Folk music works when incorporated into Metal anthems. When I saw the Mongolian influences that Tennger Cavalry boasts, I decided to give them a listen and see just how far East the rabbit hole of innovative Folk Metal goes, and all I can say after the experience is I regret nothing.

Tenngar Cavalry’s, “Heart”, starts off with a very folkish and almost bluesy riff on distorted guitars. The intro sounds very exotic, especially for people like me who are more familiar with the musical theory of Asian music than with the feel and sound of the music itself. Right after the traditional sounding guitars fade, the guitars send forth a frenzied barrage of high speed chords before the vocals start. And when the vocals start, one finds out how ominous Mongolian throat singing really can sound. With the instruments playing in their sombre sounding key, the traditional vocals sound like a great old one rumbling out of the abyss. There are quick switches between clean vocals, throat singing, and what vsguely sounds like a cross between the latter style and death growls, all while the guitars chug away in their eerily exotic-sounding riffs. The reason for this overall ambience is due mainly to the key it’s in, which in itself suits the innovative features present in the singing and the instrumentals. The song then continues into a solo which feels a bit off since it very dramatically changes the pace of the song, but it fits in with the slow folk passage that accompanies the clean female vocals segment. Then at last the song speeds up again, and then the violin gets the spotlight as the song winds down.

The next song on the single was a radio edit of, “Heart”, which felt a bit disappointing since it cut down the thirteen minutes of virtuosity into a bite-sized four minute piece. Although it was short, the radio edit still captured some of the highlights of the song writing, such as how well the vocals compliment the evil sounding distorted riffs in the intro and how quickly and cleanly the vocal transitions happens. Overall the only major disappointment was that it didn’t feature the entirety of the opening folk medley or demonstrate the musicianship further by having the change in tempos between the first solo and the female vocals to the rest of the song, but it nonetheless captures the essence of the song.

A good way to sum up, “Heart”, is with a comparison about its thirteen minute length. For a Power Metal band, a song would have to be thirteen minutes to include many solos, anthemic leads, and sweeping vocals in order to make a the song epic. For Tenngar Cavalry thirteen minutes is used to include as much innovative aspects in their music as they can, with an emphasis on quality and musicianship. Overall, “Heart”, is a thoroughly unique song whose broad range of influences and time changes make it feel like an album in itself, and one of the most unique and innovative tracks I’ve listened to this year. When you’re feeling the need to listen to some new music, try Tenngar Cavalry’s, “Heart”. You can’t go wrong with the sheer creativity of the songwriting and the skill of its performance.