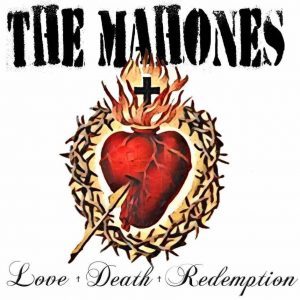 The Mahones had great plans for this year, besides all the gigs they have planned they settled for the release of nothing less then 4 albums. I doubt if they gonna pull that one off this year, but hey, WTF, we have another fine The Mahones album in our hands.
The albums is dedicated to Annie McConnell-Strong, a woman who has contributed a lot to the Irish culture in Canada. A tribute to this wonderful lady who died tragically after accepting an award for her work, is something the lady deserves. And when such a fine thing has to be done, it can’t be done better then by a band which is strongly connected with Irish Folk.
Well not only Finny McConnell is in such a band, but the frontman of The Mahones is Annie McConnell son as well.
When you put all your pride and love for your mom in the music, it takes a while before you’re satisfied. And damn, can he be satisfied. ‘Love + Death + Redemption’ has become a very special The Mahones album.
When you don’t know the story behind this album, you might wonder why they would have chosen for these songs. This album has a slightly different feel, because of all the duets and special covers, but beneath this surface there still this The Mahones sound.
The album starts off with ‘I’m Alive’ with the nice voice of Sarah Harmer and the vocals and guitarwork by John Kastner. A nice song in which Finny states he doesn’t only misses his mom, but he’s alive as well. Well, in the rest of the album we can hear this is a fact. No sad, album, full of tears, but a tribute to a strong lady, but of course there’s room for a tear here and then.
In ‘Heroes Die’, there room for the nice voice of Priya Panda. The title says it all, I think…. And there are more of that kind, giving the theme of the album ‘It’s Gonna Be Alright’ (with percussion by Johnny Fay of the Tragically Hip), ‘Never Let You Down’ and ‘Mother, My Angel’ are song-titles which don’t need to be explained.
After this we get a number of, you can say, unusual covers. Since Finny never made it a secret which bands he admired by covering a song of them, it’s not strange at all, he has chosen to cover some song he can relate to on this album. The Waterboys song ‘When Ye Go Awy’ is the first one of them. Followed by ‘Win Some, Lose Some’ and a very nice version of David Bowie’s ‘Heroes’. Although I was always of the opinion this is a song which can’t be covered without doing it harm, Finny pulled this one of. I love to listen to this punky version of the song.
Finny wrote ‘Angels’ himself for this album and I can relate to his state of mind on this one, it’s quite a peculiar track, where not used to by these folk punk-rockers.
This leaves us with the last track of this album ‘Fields Of Athenry’, a song which has been sung by lots of singers and bands, but this is a real beauty. With the beautiful voice of Damhnait Doyle, the song gets a very heavy load. I can only guess, this was one Annie McConell’s favourite songs, and if this is the case I can only hope she can hear this beautiful version…

‘Love – Death – Redemption’ is not only a very special album, but it has become a beautiful album and a sublime tribute to a true Irish hero, Annie McConell.