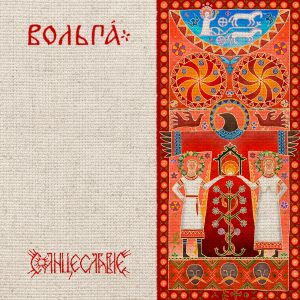 Vol’ga is a new studio project from Russia (if you hadn’t guessed by the name) who have just released their debut entitled “Heliolatry” for their label Casus Belli Musica. Featuring 10 tracks totaling about 40 minutes, “Heliolatry” I think will sound familiar to most of you on some level if you listen to a lot of Russian based folk metal. Vol’ga features members of the epic Oprich and the overall sound is very reminiscent of them, albeit not as hard core sounding with more folk touches and some different directions. Besides Oprich as the obvious comparison I would say maybe a little Grimner, early Paganland, Grai and even Alvenrad were in my head listening to this, especially the later. While maybe not as super progressive as Alvenrad, there is a retro sound to this. When I think of retro it could also be a lot of the tracks have a base in traditional Russian folk melodies and peasant songs. There are two main factors that I think will determine if you would get into this. First would be how much you like Pan’s vocal delivery which I would describe as a deep baritone. He is not the only vocalist on here but seems to be more or less the lead here. Secondly would be the folk instruments used and how they integrate into the electrics/percussion which I would classify as flutes and whistles with others a little harder to pick out but there. I happen to like both notes here which make this an enjoyable listen. The album is semi-conceptual and centers around the Sun and it’s effect on everything around from the mountains to the birds to the farmers’ fields. I don’t think that the album has that concept feel other than the tracks being stylistically similar but if you translate the Russian lyrics, you can see the common thread. There is some other style of track on here….examples include the female vocal lead on “Kak Po Goram” (“Like The Mountains”) was a nice change of pace as is the heavier “Svarozic” (the Slavic god of fire and smithery) and the stripped down closing track “Rodnik” (“Spring”). All in all, a decent album and more of a listening to type of album as opposed to a party type as the style and subject are definitely in need of your utmost attention. A nice simple mix is all that was needed here even though in some cases it can sound a little cacophonous it works at making the vocals and folk instrumentation the primary items to focus on. A nice album from the collective Vol’ga to check out and worthy of more than a few listens.