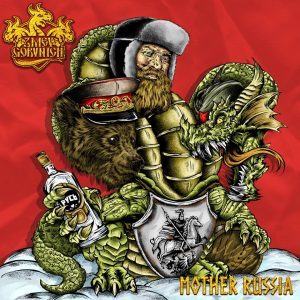 One of my favorite EP’s from 2016 was “Malafya”, the debut from Russia’s Zmey Gorynich and now a debut full length is monopolizing my listening. Entitled “Mother Russia”, it has a total of 14 tracks which includes the tracks from the EP plus some brand-new ones for their label Soundage. If you are in the need for speed, then you have come to the right place as Zmey Gorynich seemingly have no “off” button and run at full throttle all of the time. I think an even quirkier Trollfest mixed with some Nordheim and some form of electronica would be the best things I could put together description wise with obvious Russian traditional, death metal and hardcore influences thrown in for good measure. Sounds hard to describe right? I could probably write about why this is folk metal and also why it isn’t with equal arguments either way. The main thing is that it is entirely different than most albums you would consider a folk metal release and I think that is why I love it so much since it is so “out there”. One huge part of this (amongst many) that I love is the vocal play of male vocalist Mityay and female vocalist Rys. Mityay jumps from gruff to staccato to swashbuckling and every point in between and crushes it every time. Rys is not relegated to just singing a note here or there in the background but harmonizes and takes control at numerous points during the album (I especially love the attitude she presents in “Sorochinskaya Yarmarka” and “Boroda”) Musically, the combination of Kudiyar (guitar) Gvozd (Bass) and Stalin (drums) is downright lethal……breakdowns, solos, divebombs, stops and restarts, breakneck tempos….no slip ups and all killer. The tracks are all in Russian with lone exception being “Princess Of Russia” which shows that they could do either language equally well but the Russian sells it more for me. Kudiyar also jumps into folk metal musician playing instruments as varied as the harp, flute, accordion and the distinctly Russian balalaika (you know that triangle shaped guitar thing). I think you will have sensory overload trying to comprehend all of this and it would definitely take a couple of listens for things to start sinking in. Most of tracks are in the 3 minute range (given their penchant for speed this make sense) with main exception being the more “serious” “Stranstviya Rukobluda I Brata Ego Malafeya” topping over 6 minutes. The sound quality is there too with punch in the guts drums, crunchy bass and guitar and plenty of attention paid to the folk instruments and vocals. Again, I think this might overwhelm most of you like a tidal wave. For those that want to surf on the waves of epicness, grab your board and jump onto the next one cresting in “Mother Russia” and come along for the ride……I would say debut full length album of the year contender for sure.