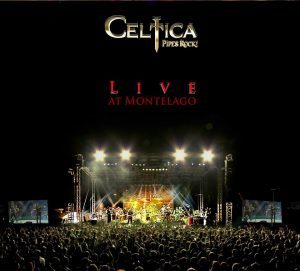 ‘With a work with such quality that it seems more like a studio recording than a live concert, Celtica brings us their first live album, recorded in their 2017 concert at the Celtic festival of Montelago (Italy).” Well this is how Leo started his review here on the live album a few months ago.
Using the same recordings, you can now fully dive into this magnificent concert with this DVD.
If you were already blown away by the quality of the live performance on the CD, there’s more for you in stock. And this is an understatement.
This DVD shows what the band is capable of on stage, put in in your player and you can feast your eyes with not only quality music but a great show as well. The band makes a statement with the intro of the first song ‘Steamphonia’. When the guitar-players play the kettle-drums with fire-lit drumsticks and the bagpipers enter the stage with fire-lit pipes, you know for sure, this is going to be one hell of a show.
And where a normal Celtica show is a true spectacle, this concert
For this occasion, the band gets the help of the orchestra “Compagnia della Piuma”. The smooth orchestration of the band gets a very special feel by this. Adding a choir to the music is nice as well. Don’t expect big alterations in the music, the orchestra and choir are mainly supporting the Celtica music.

Maybe on CD you’ll almost forget this is a live concert, but you won’t suffer from this on this DVD. The show is recorded properly and you’ll get plenty of shots from the audience, close ups, but above all, it has the feel of watching a concert.

Besides this there are a few bonuses on the disk, nice for the fans, but I don’t think I’m going to watch them a lot.

This DVD is suitable for two groups: the Celtica fans who want to have a keepsake of the concert they have been attending. And the second group of people: All the ones who have never seen a Celtica concert. Enjoy an evening with this Celtic Rock Showband Celtica with ‘Live in Montelago’ by buying this DVD.