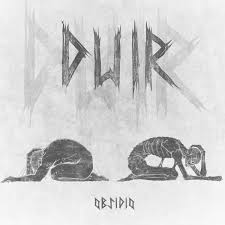 Try to imagine you are in a band. Say a band that plays metal with influences from the olden days. Playing bagpipes, distorted guitars and harsh vocals. So far so good. Now imagine releasing a EP in 2014 with six songs. Reviews are not all entirely favourable. Especially there is criticism on the production and mix. What to do? Maybe spend some more time, effort and money on the sound part of your next release? Or do it the way Duir thinks is the way forward. That is to release a second EP, containing two songs previously released and four new songs. Without any improvement sound wise.

So first thing to notice is that the production and mix is still way beyond par. The drums sound dreadful. As dry as Nevada after an unusually hot summer. The drummer must break his drumtwigs several times at each song. Listen to Destarsi. The overall sound is muffled, but the drums are very much in the front of the mix. And what’s worse, they are all over the place. You all know Dave Lombardo? He is super tight. In Duir his absolute opposite is playing drums.

There is no possible escape from the disappointing sound. To be honest, the song writing is not too bad. But hardly anyone will take the time to acknowledge that. So what is the ambition of Duir? What goals do they have for the band? Probably not to conquer the world. Because in order to do so, one would have to take criticism as a gift, that makes it possible to grow. And not copy paste two songs from a four year old release without improving the sound. What’s more, even the loudness of the songs vary considerably. How is that possible? Don’t you listen to the finished product? And if you do, don’t you care?

Okay, so maybe I am a bit unfriendly. It’s just that, if you master your instruments and know how to write a decent enough song, why don’t you challenge yourself to release the absolute best EP that you are capable of? Come on guys, you can do better than this.