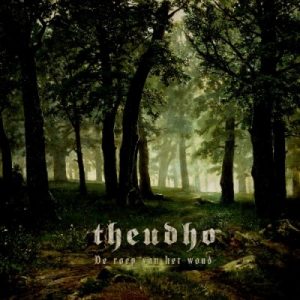 I think if you have listened to Theudho at all over the years (as I have) you may have been somewhat frustrated at the inconsistency of their releases. By that, I mean that stylistically they seem to sound completely different from release to release with either alterations to the heaviness, the vocals, the lyrics, the style……basically every aspect of their sound. Plus, the inability to put a string of solid EP’s/albums/more than just one song out at a time has also been a bit bizarre and inconsistent. Despite being pretty prolific in 15+ years (3 full lengths plus numerous EP’s and singles) they have never caught on as much as they could have. Well, that is about to change with what I would easily call their finest release. To be issued by Heidens Hart in Europe, Aurora Australis in the Pacific and Wolftyr in the states, “De Roep Van Het Woud” (“The Call Of The Woods”) is a finished and focused 4th full length which sees Theudho now back to basically a one man project. J.S. is once again doing all of the heavy lifting (vocals and music) and I think not having anyone else involved actually is a much better thing with only having a single creator to the project. Having role players didn’t really seem to synergize as much as him just doing it solo and better than ever on “De Roep….” Hailing from Belgium (the Dutch speaking area known as East Flanders), Theudho may have less in common with their countrymates Ancient Rites other than lyrical themes touching on historical concepts at points. I would say that pagan/black metal in the vein of Falkenbach, Bathory and I think Germany’s Varg to an extent (although a much heavier version) are 3 pretty good starting points. Maybe even some of England’s Nordland if you’ve heard them or some classic Emperor or Satyricon? From the start, I was waiting to hear some concern in either the music, writing, vocals…..and nothing ever seemed to be a shortcoming in it’s 54 minutes and 10 tracks. Thankfully no intro but a nice instrumental near the end “Het Moeraslicht” (“The Swamp Light”) is the only track that differs in terms of its style (keyboard/synth/soundtrack based) on the album but fits within the overall context. For those that happen to like the variety of the Theudho sound, there is definitely a cross section spanning their discography with guitar harmonies, various track tempos and keyboard arrangements. The tracks are solidly constructed with relatively simple main riffs with layers built onto them averaging about 5 minutes in length. As a whole the album is great, but I don’t know if there is anything that jumps out at you per se or super memorable specific parts. It really is an entire album and meant to be consumed as one entity in my opinion as opposed to songs thrown together to make an album….make sense? Not necessarily a concept album but better as a listen from beginning to end which I have numerous times. I feel the most successful material is the slower, more brooding, darker parts which happen to be a majority of the album. Sonically, the mix is edgy from a guitar standpoint and has a nice undercurrent of texture and tangibility for everything else and another spot-on job in mastering from the talents of Dan Swanö. I think you will dig this if you like any era of the Theudho sound and to me this sounds like the starting point of a completely new chapter and finally the culmination of years of hard work to get to this point. Great album.