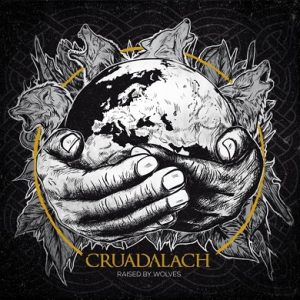 I was a fan of the last Cruadalach album from 2015 (“Rebel Against Me”) and was surprised at how they melded folk metal and hardcore pretty seamlessly. A lot has changed in 3 years, including some major lineup changes and it was going to be interesting to see how they would sound. “Raised By Wolves” I am happy to say is the next natural progression in the Cruadalach sound and a very successful 3rd full length from them. Now don’t think that they have progressed away from that hardcore edged sound as that is still their bread and butter, but now they have added a few other sides to their sound as well. The album is 10 tracks totaling about 36 minutes with 2 instrumentals (intro “Waking The Courage” and “The Farewell Too Soon”) which given the length of the album may be a little annoying but luckily they pack 8 soul crushing tracks in between to make you forgive it. So, I mentioned the hardcore vibe and it still exists for sure…… if you strip the folk instruments and female vocals away, I swear you would think you were listening to old Biohazard, Crumbsuckers or Sick Of It All. Besides the music leaning that way, new vocalist Petr Caisl (replacing the mighty Radalf) sounds like he just ate a beer bottle and is spitting out the shards and gives that extra kick towards the moshing side of town. However, for all the heaviness here the balance of the folky and softer side is abundant with wind specialist and vocalist Petra Jadrna and duel violinists Hana Slanarova and Eliska Kasprzyk, which takes care of the vocals as well, their contributions almost tip them being a little more symphonic this time around. The rest of the band (guitarists Jan Kapic and Jan Knotek, bassist Ondrej Novak and drummer Tom Kasprzyk) all perform strongly in the riff and beatdown department. For those keeping score, yes, they are an 8 piece but don’t sound as sloppy or out of control as one could possibly think. On the contrary, Cruadalach are very methodical and show restraint and it shows in song length…..most tracks are under 4 minutes so no music acrobatics just get to the point and do it quickly. Lyrics are in English for the Czech Republic group which is another highlight as the message comes thru loud and clear. Another smart choice is lyrical content not being in the fantasy, history or folklore department but more about reality and life in general…..”Relationshit”, “Godwall Chant” and first single “Brave New Dawn” are as poignant and on target as any of the more mainstream acts out there. Mix and overall sound is edgy and in your face with a nice blend of all vocals and instrumentation. I probably listened to this three times in a row this morning and it gets better with every listen and stays with you….catchy and brutal, yet pretty accessible.
Cruadalach have put together a tight group of songs for their latest effort and the best of their career so far…..great album.