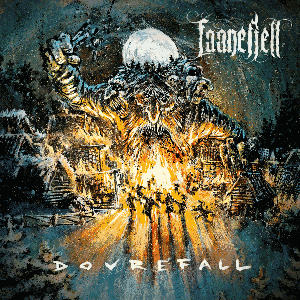 The first impression I got from both the stage getup of Faanefjell and the fact that they play a type of Blackened Folk Metal, was that their music occupyed the same niche of folk metal as acts like Finntroll and Trollfest. And as one might guess from my reviews in the past about bands that play any variety of Black Metal-inspired music, I consider good black metal hard to pull off. And that itself is only because like Symphonic Metal in general, Black Metal has its own range of musical pitfalls in the genre. Don’t get me wrong, it is possible to pull off good Black Metal. When you pull off good Black Metal you frequently end up pulling off great heavy metal. When I found out that Faanafjell’s variety of Black Metal is also of the symphonic persuasion, I found myself quite skeptical. But despite everything that could have gone wrong, Dovrefall truly surprised me.
The opening track, “Styggedommen Vaakner”, starts off with typical high speed drumming and melodic riffs from the guitars. One thing that stands out immediately is the riffing structure, the drumming pattern, and especially the vocals. Here they sound more like mid-register death metal growls than the typical black metal screams, and overall the instruments had good note progressions. There are some recycled phrases here and there, mind you, but they never dragged on.
“Hat”, the second song, continues the trend of note progression with a barrage of riffing and drumming that immediately transitions into alternating passages of arpeggios and high speed guitar noodling with heavy drum beats. The solo on this track is a disappointment, though. It feels forced, and hides behind the drums initially, and then is somewhat redeemed when the drums fade.
Following, “Hat”, is the chillingly evil, “Frostbitt”, which opens again with brilliant death growls accompanying a high speed guitar frenzy. Certain licks feature a resonating bass motif that makes the music feel really ominous, which is another strong point of this album which will pop up with even greater effect on later tracks.
The Widdershin waltz around by-the-numbers Black Metal reaches its most extreme with the track, “Svineslaktervisa”, which I believe is the best song on the album. The opening has a terrifying interplay of muted guitar and down-tuned bass. The vocals sounds like they were done by an enraged pit-fiend. What makes this song really sinister-sounding, though, are the bass and drums, both of which dominate the instrumentation. The general approach they were going for seems to be: down-tune everything and play the lowest register humanly possible. It has actually been proven that beyond a certain tonal threshold humans perceive sounds as more unsettling, and the bass and drums played in on this track appears to have been made significantly lower than the guitars on purpose, to achieve an evil feel. There is also a very creepy motif repeated throughout the song during what appeared to be the lyrical chorus. Picture the bastard offspring of a stereotypical carnival tune played two octaves lower with an eerie minor pentatonic scale, the kind of tune played when releasing the Hounds of Anwnn on the wild hunt.
Innovative approaches to songwriting continue into the next track, “Vinstille”, which most significantly features an interesting drum beat that has a heavy, bassy sound to it. Imagine every other beat being like the heavy bass blasts of dance music but sounding being played as blast beats, not unlike the blaring snare drums off Vader’s Litany.
Aside from the songs I have covered in-depth there were several stand out tracks on the last few passages including a solo on the final track, “Fjellfest”, that sounds like a Black Metal rendition of the opening riffs of, “Whiplash”, by Metallica. The highlight of the already impressive vocal performance on Dovrefall is the track, “Heks og Djevel”, on which there is a segment where the guitars plays a riff of virtuosic sweep picking arpeggio, varying it every so often as the vocals matches the change in pitch between notes played on the guitars.
Overall, the strongest aspects of this album was the dominance of the bass, the employment of innovative songwriting techniques, and crushing extreme metal vocals. I say extreme because the vocals on this album have ranged from Black Metal screams, to brutal sounding growls. The range of the performance reminds me a bit of the versatility of Davide Cicalese’s performance on Furor Gallico. The speed at which the growls changes on Dovrefall alternates is very impressive, and is done smoothly as the next clean vocalist. Like I mentioned at the start of this review, Dovrefall sidesteps many of the pitfalls that plague Symphonic and Black metal. Being an avid fan of Power Metal, I have come to appreciate how the presence of bass can alter the feel of music if present, which it does here to great effect. Here the instruments are used well and there is clearly a broad spectrum of musical influences that will, no doubt, result in a broad appeal (as one could tell from my album references). I would recommend Dovrefall to any Black Metal fan. And anyone who wants to hear Black Metal done in an unusual and interesting way would also enjoy this album.