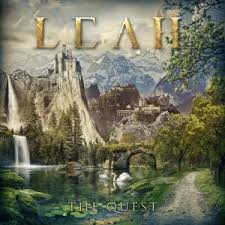 My only prior exposure to the works of Leah has been indirectly through advertisements and some hearsay. And with a bold description such as Celtic Fantasy Metal, I dived into this album expecting music as bold as their description. But the sheer originality and creativity on this album caught me completely off guard. The album has a truly captivating opening with, “the Quest”, where Leah’s chanting and the backing instruments weave themselves into a truly captivating and mysterious sounding track. This trend continues into the second track, “Edge of your Sword”, both of which wouldn’t seem out of place being sung at a banquet held by the fair folk in some secluded grove. Despite their lack of heaviness, both of these tracks have really solid guitar solos, with the latter track featuring a wailing virtuosic performance that reminds me a bit of Yngwie Malmsteen. Covering all the songs in this review would be difficult as they all are so incredibly varied, the songs being written for a specific purpose, with specific instrumentation and radically different themes. Frequently bands playing the cinematic style of Symphonic Metal that occupies the same axis as The Quest follows the same pattern over and over again, and have a distinct sound. And as mentioned previously, this is definitely not the case here. One example of this diversity is the song, “Heir”, which has triumphant riffing and sing along choruses reminiscent of Power Metal but doesn’t conform to the typical tropes of said genre, such as excessive double bass drumming or shredding. Instead the track resorts to pure vocal skill to magnify the effect of the atmosphere, with flutes kicking in to enhance the typical “power and glory” feel of the song in a way I’ve never heard before. Another example of the eclectic songwriting is, “Ghost upon a throne”, in which the guitars, flutes, and background instruments become an irresistible medium of immersion for the emotions conveyed by the music. Worth mentioning while immersion is being discussed is, “Labyrinth”, a song which features down-tuned guitars and eerie sounding celtic melodies, further diversifying the approaches on the album with melancholic lyrics about standing stones and groves that makes one picture a living, breathing earth. There’s even a lamenting ballad about love and loss called: “The Water is Wide”, it feels like one of those poems that one is embarrassed to like, but still appreciate because of it’s familiarity and relatability (although this might just be because the song is a spin on amazing grace). Looking back at my expectations for this album, admittedly I wasn’t expecting typical Metal. Indeed I was correct, this isn’t typical Metal. In fact, I believe that more traditionally minded Metal fans (which usually includes myself) would dislike the fact that this album seemingly doesn’t conform to any noticeable Metal standards. But that is the beauty of The Quest. There’s no pretense of conformity to it, the album is diverse, and each song is hand-forged by a master smith of verse for the singular purpose of purveying a part of the epic tale this album tells. And the result is a staunchly original, truly captivating masterpiece that falls into none of the usual pitfalls that albums of comparable ambition frequently does. Leah’s The Quest is well written overall, brilliantly executed, and will no doubt appeal to a wider music audience than most other Metal albums of the genre. Some people might be a bit uncomfortable with many of the innovative features, and the album is, I admit, an acquired taste. But aside from this drawback, the album really is a masterpiece.