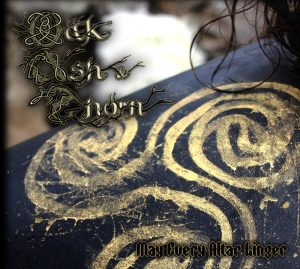 When I think of Colorado here in the good old USA as far as music I primarily think of doomy/sludge bands (especially our friends in The Flight Of Sleipnir) or a ton of the black metal stuff. Oak, Ash And Thorn are definitely changing that for me with their debut full length with “May Every Altar Linger”. Independently released, “May Every….” features 7 tracks totaling around 40 minutes and will be out on September 19th via Bandcamp. So which category of metal do they fit in? I guess folk metal if you consider Ensiferum folk metal (possibly) and I think that is a good band as a start to compared them to. I think some more of the New England fantasy/progressive/power metal acts like Wandering Oak, Lyra, Dainsleif and the mighty Wilderun are closer overall description wise. I would say they are heavier than these acts and less progressive overall but still have some similar style and sounds. While at points they have been a 5 piece, it appears they are now a 4 piece with vocals, guitar, bass and drums. For those familiar with OA and T, you may notice that the full length is the same title as a previous released EP from 2014 and 2 tracks have carried over on the full length (“Cast Into Stone” and “Forsake The Morrow”) in reworked versions presumably. The tracks here range from under 3 minutes (“Drink To The Dead”) to 2 over 8 minutes (opener “Let The Heartfires Burn” and closer “Forsake The Morrow”) There will be a couple of things that will stand out upon listening. First will be the vocal variation of vocalist and guitarist Adam Armstrong who varies between a death/black metal growl to a tenor clean style which adds some dynamics to the tracks for sure….he does both really well but I think a whole album of just one would get taxing so good job in utilizing both especially in “Headless” and “A Flame To The Woods”. The riffing and interplay between guitarist Casey Hill and the aforementioned Armstrong and bassist Dylan Loving is exceptional with great style and technique used throughout. Last and certainly not least is drummer Cierra White who absolutely kills it from beginning to end on this album and dare I call her the “MVP” here…..she brings the pain in every track whether it’s the blast beat, the fills or the relentlessness…..check out instrumental “Release The Moon” for a nice sampling of everything she brings to the table. The mix and overall sound is decent with no obvious issues but pretty solid whether at lower or higher volume….everything is discernable and sounds at appropriate levels, although some of the vocals may have been a little too up front on occasion. I just took a quick look at my top debuts list for 2018 and I don’t see any reason that this wouldn’t be somewhere in my top 10. A great, well written and enjoyable album by Oak Ash And Thorn and I think big things ahead for these Rocky Mountain folk metallers.