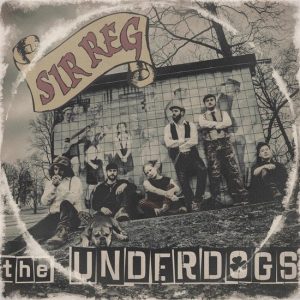 Sir Reg is one great butt kicking Irish band. They are not held back at all by the fact that they are based in Sweden, but in fact they are probably better for it. Some of the best bands I know come from Sweden and this is one that makes that list. Fronted by Brendan Sheehy originally from Dublin the band has an authentic Irish feel and it really rocks. The Underdogs has a theme and a feeling that runs through it and really adds to the overall satisfaction of the album. It’s about believing in yourself and pushing everything out of the way to pursue your dreams and goals. There is a definite 70s rock vibe in some songs like the stellar” Sinner of the Century” and “The Stopover” while they have a laid back rock groove they still stay true to the punk rock foundation of the band. In songs like” Conor Mcgregor”,” The Underdogs”, and the excellent instrumental” Cairbre” the band sails through punk rock and folk with a delicate touch and then brings down the hammer in the fashion of the Pogues or the Dubliners. The party never ends until the last chord is played and along the way we have the pleasure of hard rocking punk , ballads and the occasional laugh. One of my favorite songs is “Stereotypical Drunken Feckin’Irish Song” if you can get through it without a smile and a fun time then you’re dead inside. The Vocals are incredible, the instruments are played with beauty and power and the songs are crafted with the goal of telling stories, as the best Irish punk and folk should be. Go out and get a copy right now you won’t regret it and I’m sure if you can catch this band live it would be a memorable evening.