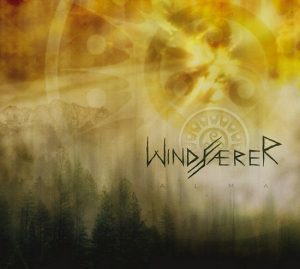 What a last few years it has been for Windfaerer. Two amazing releases (full length album “Tenebrosum” and split with Dumal and Wolfcloak “Coniuratio Nigrum Atlantika”), some killer touring/fests and now they have been recently signed to the epic Avantgarde (home to artists such as Saor, Selvans, Ashbringer and Sojourner for our folk metal purposes). With that new label comes the monumental 3rd full length album entitled “Alma” which sees the NJ USA horde branching further into the nothingness. If the initial single “Dawn Of Phantom Light” was the harbinger of what to expect, it was like seeing an asteroid heading straight for us with the rest of the album being an even bigger one right behind it……an assured annihilation with no survivors. Featuring 8 tracks at 51 minutes, “Alma” has enough of the familiar black metal stylings of past releases while adding in some new wrinkles. From the familiar point of view, there is still the omnipresent roar of vocalist/guitarist Michael Gonçalves and the controlled, soulful and sometimes frantic violin of Ben Karas. Joining them is the same configuration from the split in 2nd guitarist Itay Keren, bassist Michael Muñoz and drummer James Applegate and the synergy of these 5 is lethal. The music has gone into some slightly more progressive directions, reminding me of a combination of Amiensus, Heid, Dissection and Watain blended with a little classic Vovod with the equally otherworldly Mithras. While the tracks feature some of the most relentless and fastest material of their discography it also has some of the most moving and darkest instrumental and slower passages as well. There is more mood here and 2 instrumental tracks (“O Além” and “Awakening”) which I would ordinarily be slightly aggravated about, but I think given the context of the albums machinations, work in placing a break where needed in the album. Dare I even say some tracks have a “groove” to them with riffs (my favorite track “Skybound” and “Under The Sign Of Sol”) which will stick in your head for days afterwards. The debate about who/what Windfaerer are/is could go on for days with black metal with a folk instrumentalist being as close a description as you’ll get but if it’s good who cares? The maturity in the songwriting to me is pretty apparent with Windfaerer sticking to their strong suits and not homogenizing their sound in the least….rather blending in some more accessible material to make the heavy parts that much heavier. I would say if I had 2 negatives (barely negatives) are that some of the tracks don’t end but rather fade out which I think there could have been a “better” way somehow but yes nitpicky. Secondly, I think the overall sound is a little too murky or reserved for me….while everything is audible it isn’t as up front as I think it could be….the CD I think is a must in this case as I compared my mp3’s to the WAV tracks on Bandcamp and I definitely think the separation, energy and detail is there. 2018 has been an amazing year of music and Avantgarde has snagged another epic release in “Alma”. If you haven’t heard of Windfaerer before now, it is time to join the loyal and start listening. Great album.