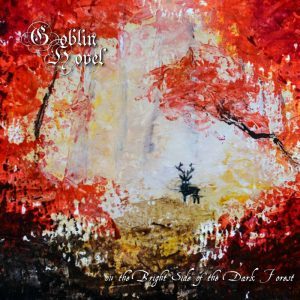 I can say it has been long overdue…..the recent success that Goblin Hovel has gained recently that is. After two hugely successful appearances at Maryland Folk Metal Fest and Shadow Woods, GH just dropped seemingly out of nowhere their latest opus “On The Bright Side Of The Dark Forest”. I have stopped counting how many releases they have at this point and lately it has definitely been quality over quantity for the horde from upstate New York, USA. The old stuff is awesome….the newer stuff is just better and the solidified lineup is no small part of the reason why. I would say this has been the lineup for the last few releases, including prob my still favorite from them in 2016’s “Revered Revenant Of Irreverence”….even if a member or two changes out, It still appears they have reached their collective strive in balancing numerous musical styles under the GH banner. Still independent and on Bandcamp, “On The Bright Side….” is 10 tracks at just around 32 minutes and has a little more diversity here and as usual, is an all-around great release. I would say the overall vibe is much happier here and the album title seems apropos given the material. Don’t get me wrong….it is still dark and creepy in their signature metallic folk style (metal based stylings played with acoustic based instrumentation), but I see them peeking into the light a little more on this one. Throwing a couple of traditional Celtic style cover tracks (“Follow Me Up To Carlow” and “Moonshiners”) also adds to a livelier and catchier album. Prefer the darker stuff? Head right to “(How To) Start A Witch Hunt” or “Lady Of The Noose” for that. Maybe want something a little campier and slightly dirgey? “Squonk Tears” for sure. The album even closes with the stripped down and introspective “Eyes Like The Sunrise”. So, what I am trying to say is there is a little bit o’ everything on here and hits various points on the map. Being an acoustic based band really allows you to hear all of the instrumentation and the mix is pretty hands off……guitar, bouzouki and whistle are the most prominent with cello and of course, some means of percussion. Vocals still have either choral stuff along with the death moans and cleans and they all are a big part of the sound as well. With equal parts quirky, unique, honest and heavy “On The Bright Side……” is yet another triumph in the ever growing Goblin Hovel discography.