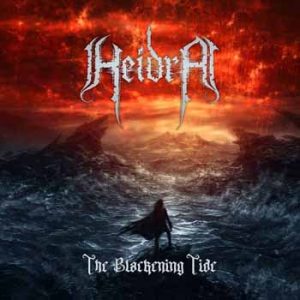 Having previously listened to some of their material, I’ve begun to think of Heidra’s music as occupying that same controversial niche as the music of Wintersun albeit with a clearly different set of musical influences. However, Heidra’s latest effort, The Blackening Tide, strikes the masterpiece chord with such resonance you’d swear they were using hafted axes for picks. While they have veered somewhat into the area of Power Metal before on The Blackening Tide, vivid, meaningful lyrics combined with their folk metal influences compound with acoustic leads, catchy melodies, and heavy riffs to deliver their best effort yet.
Before I continue with my review, let me just clarify the type of Power Metal that Heidra plays on this specific album. It isn’t the flowery, pretty music that the likes of Rhapsody or Stratovarius plays. Even though the daintier melodies of some Power Metal bands have their vocal fans (I myself have no problem with happier metal songs as long as they have legitimate punch), they also have their vocal critics, so I feel the need to define my use of Power Metal so as to avoid putting anybody off this album.
The Blackening Tide’s main strength is in the guitar work and the lyrics. The lyrics themselves are your typical Power Metal sing along songs. For example, the opening song, “Dawn”, features the word “glory”, and the obligatory references to “standing together” within the first minute of the main song. However, the folk-inspired acoustic opening and chanting nature of the vocals create an atmosphere where what would normally feel like standard Power Metal seems more like authentic Viking war boasting in song form. In addition, the lyrics tie together so that every song feels like it has a story to tell, and the album feels has an overarching concept, something even dedicated Power Metal releases can fail at without the use of liner notes. Aside from the lyrics, the second strong point is the guitar work and overall heaviness of the music.
Although the majority of the music on the album has a heaviness reminiscent of classic Heavy Metal music, there are two other overwhelming musical sounds on the album. The first is the same double bass-heavy melodic style of Metal they usually play, with more of an emphasis on guitar shredding, and the second is the occasional folkish acoustic segment. The constant interplay of these three sounds results in a very dynamic sound where sudden yet smooth transitions constantly keep your attention. This is especially prevalent on tracks like. “The Price in Blood”, where the acoustic undertones of the opening transition into a virtuosic guitar lick played over and over while the other instruments blaze on, or, “Rain of Embers”, where the guitars parts are so intricate you could pass some leads off for solos themselves. It is worth mentioning, however, that the main drawback, like with much music that plays an energetic and fast paced style of Metal, is that on some tracks the same riff or drum beat in repetition sounds like it plays on autopilot at times. “Crown of Five Fingers” exemplifies this repetition, where the drum and guitar breakdown comes across as mechanical and forced rather than as abrasive as it was no doubt intended to be. Overall the style itself is in no way a departure from Heidra’s typical sound. The songwriting on The Blackening Tide simply appears to be the paragon of what their music always strives for.
Before my closing remarks, I feel that the the single off this album and the eponymous track are also worth mentioning. Usually, the singles that come of albums are typically more inclined to have a broad appeal in comparison to the rest of an album. Despite this, “Lady of the Shade”, which was the most promoted song, deviates from this, being one of the heaviest and fiercest tracks on the album. Other than that, the eponymous, “Blackening Tide”, while starting off sounding a lot like a power ballad, goes into a more melodic version of the aforementioned track with the same bite to every single beat.
Having more than thoroughly covered the abstract sound of the album, I can honestly say that the nuances and intricacies of the music are difficult to describe verbally. That being said, because The Blackening Tide has such a timeless sound and demonstrates such compositional skill as it does, the album will no doubt have a broad appeal. If any Power Metal is deserving of the term, True Metal, Heidra’s acoustic lamentations and catchy lyrics, oozing warrior heroism, has an authentically Viking feel to it that strikes so true to the spirit of Metal.
I can confidently that say if Heidra’s music is worth listening to, this is album is worth owning.