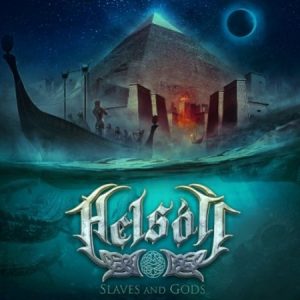 I use the word “controversial” semi-seriously on a few releases a year when a band may put out an album that may cause a stir with their fan base. Last year with Ensiferum’s latest “Two Paths” and earlier this year with Primordial’s “Exile Amonsgt The Ruins” come to mind…..controversial? Well, these albums are different from their predecessors for one reason or another and the latest from Helsott may also get that “controversial” description from a few listeners. “Slaves And Gods” is their 2nd full length and 1st for their label, M-Theory Audio and is arriving on October 12th. Look, I am a huge Helsott fan and they could probably sing/bellow the phone book and I would like it. “Slaves And Gods” will have many scratching their head at whether this is a Helsott album or a “Helsott” album. What’s the difference? Amongst it’s 10 tracks and 46 minutes are tons of guest appearance on various parts whether vocals or music that may make it hard to differentiate where Helsott ends and guests begin. Secondly, musically they are drifting into more progressive waters than on 2014’s “Woven” and was hinted on their EP “The Healer” from last year. Thirdly, the lineup has undergone some changes with Eric Dow on vocals, Cooper Dustman on drums as always with Mark Dow returning to the band on guitar and uberfan/new bassist Michael “Doc” Beaulieu hoping on board. Multi-talented Steph Sparrow is also here vocally and with key arrangements, but I would say she is not as prominent as she was on “Woven” but is always epic no matter what. There are a few tracks I think that will be more familiar sounding as Helsott tracks namely the title track “Whisky Breath”, and the last 3 “Zep Tepi”, “Return Hyperborea” and their classic “Honour Thy Valkyrie” redone for this release. The other tracks are chock full of guest vocalists, guitarists and instrumentalists. Thankfully it doesn’t sound patched together like Folkodia and Folkearth but extensions of the Helsott sound. The list of guests is too lengthy but members of the mighty Trollfest, Arkona, Equilibrium, Heidevolk and Elvenking all make amazing contributions to the remaining tracks. I don’t want to forget to mention Bjorn Friedrichsen who contributes bass to many of the tracks as well. The album ends with a cover of Tom Petty’s “Running Down A Dream” which is a strange choice for a cover track but they Helsottify it nicely. I think the mix and overall sound is decent with nothing over the top sonically….just right down the middle. This review took a lot longer than I anticipated as I had some mixed feelings regarding the album which is strange as I usually instantaneously like everything they do. It is a huge departure from their previous material and it finally just clicked with me as something bigger and better from them. There are a lot more things to hear and the overall style is now a mix of some of the pagan with more folk, progressive and thrash mixed in….what’s not to like? If you are fan of “Woven” or “The Healer” I am sure it will take you some time to appreciate it but don’t worry….it will happen as it did for me. So, I’m sure you’re wondering…. is it Helsott or “Helsott”? Neither…… it’s HELSOTT. Great album.