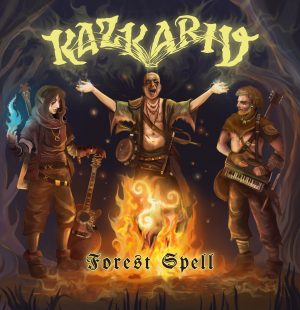 ‘Forest Spell’ is the new album of Kazkariv. EP or full length? It’s an album, but with less then 30 minutes I won’t call it a full length.
It’s quite a while ago, when the kids released their first album. Now the guys have grown up and that’s a thing which can be heard on their album. It’s quite a nice production.
But listening to this album, you might wonder if this is folk-metal. In my opinion it’s not. It’s quite trollish everywhere, but besides of a small piece of folky flutes in the title-track ‘Forest Spell’ it has no folk-elements. Isn’t ‘Scarborough Fair’ a traditional folk-song you might think. Yes, it is, but the version of Kazkariv is not very folky and it adds nothing to this song. The song has been sung by lots of bands and I seldom hear great new versions of this song. Kazkariv is no exception to this rule.
What is it, Kazkariv produces. The Australian storytellers tell some stories on this album in a way which I can describe the best as Monthy Python stories. The absurd stories and the sound of the vocals remind me of these great English comedians the most. In a song like ‘Ogrelord’ this vulcano of absurdism erupts and the thick sticky humor drips slowly of my loudspeakers.

This album can really grab my attention and don’t think any of the songs will make it to some sort of compilation which I will listen to.