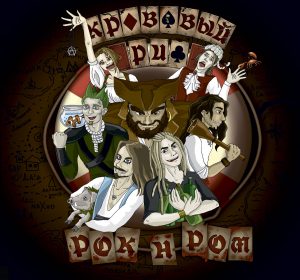 Some albums are hard to review. Some are not. Rok-n-Rom by Krovavyi Rif is not, you would think. At first face, the album is very similar to their debut album of two years ago. As on the previous album, KR plays a form of happy folk metal in the same corner as Alestorm and Trollfest. Not saying the music style is the same, only that if you are strictly into more heavy handed stuff, stay away from Rok-n-Rom. So, what is the hard thing about making up your mind about this album? It’s that it either grows on you, or you start to dislike the aspects you don’t particularly like more with every spin.

From Trollfest we know that the band has evolved somewhat. It’s still mostly fun, but the song structures and basically the handling of instruments improve with every album. Can the same be said for KR? A little bit. The overall feeling is fun, campfires, beer and wodka. Song structure not very complicated, as you would expect. Vocals more rock than metal. Use of folk instrumentson the right places, mainly violin. What HAS improved are the guitar lines. On Boroda and Dzhonni for example, these lines are very open, happy and headbangable. Other elements rather the same as on the debut album.

Downside that must be mentioned is that not all songs are equally though through. A slower song like Staryy zamok simply lacks energy. The violin does add a nice melancholic atmosphere, but not enough to save the song. The same goes for Assol’. Then again, put your happy face on listening to Zharenyy kaban and forget all your worries. The song shows that the band can play acoustically as well as distorted. In short, the album has done the same with me as Metallica’s black album. I loved it, hated it and didn’t care about it within a period of one year. Same goes for this album. Listen to it often enough and you may like it. Or start to dislike it. Who said reviewing albums was straightforward?