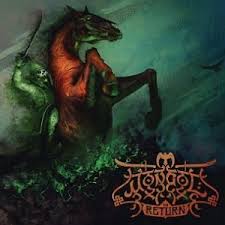 For me, folk metal should be based on different instruments’ harmony. One part from those usual in metal, and complemented with those related to popular music from different regions of the world, or sounds that evoke these instruments. A perfect example of this concept is “The Return”. Fast and well-constructed melodies performed by folk and metal instruments, where all together are building a musical balance with strength and style. It is possible to identify some influences from other folk bands, but Mongol shines with its own light.

The second track “The Return” not only gives the name to the album but also gives us a nice sample of the quality that this work holds. If you liked that song, you will greatly enjoy “Amongst the Dead”, which brings great strength and energy. “To the wind” it’s a great song too but has a more power-metal resemblance. “Dschingis Khan” reminds me a little of Turisas’ style – which is not bad – but I prefer that influence be judged by each one of you.

Then we have “The Mountain Weeps” and “River Child”, which are again as Folk as other songs and equally enjoyable. Their choruses of multiple voices are not constant, however, those included are very well implemented to the melodies. Melodies that evoke a culture that can easily pass from calm to war as the Mongolian culture was -very nice musical representation. Due to the name of the band perhaps you could expect some throat singing as a common representation of Mongolian folklore, but their melodies could bring that unique personality that differentiates this album from others in the current folk-metal scene.

In my opinion, only a little more chorus of multiple voices and some traditional overtone singing would have made from this great work, something perfect. Kudos to bands of this type that bring us different cultures in their music to make great and varied the world’s folk-metal scene. My favorite tracks? “The Return” and “Warband”.