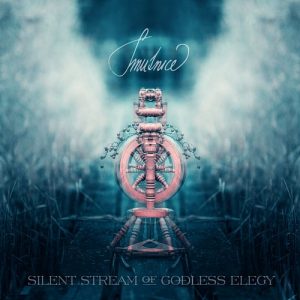 There is a lot one can tell from a band just by looking at their name. Usually names are all fairly catchy and memorable, but occasionally, you find a name like Silent Stream of Godless Elegy, which seems rather individualistic and perhaps a bit pretentious, – or at least that’s one of the two major interpretations of such a long and specific band name. The other possibility is a band with a long and elaborate name doesn’t take themselves seriously at all and are just out to have fun. In the case of Silent Stream of Godless Elegy, the fact that they have both a violinist and a cellist suggests its more of the former case, since the inclusion of a cellist and their overall promo shots suggest they are the type of metal band staffed by [classical] “musicians”. Since I took orchestra for most of my years in school and played violin, I was excited to see what a folk influenced metal band half the individual instrumentation of the string orchestras I grew up with could accomplish packing.

I admit I have given bands a hard time in the past about needless repetition, and I will say upfront I have been lenient with the rating of this release because each individual song is essentially the same two or three measures repeated over and over – and over and over – and over and over. The songs actually sound like the last part of my previous sentence reads. There are some variation sure; however, it’s literally just between intro and the verse, and the chorus and the solo, etc. However, even with the redundant songwriting, somehow the repetition never became that tedious to listen to. Maybe it’s because every one of the looped melodies was actually really well written and catchy as on the opening track, “Ten, ktery ukoval Slunce”. Additionally, no matter how good the actual music, it takes a lot of talent to hammer out the same notes without starting to play on autopilot. The overall impression I got was that the entire band poured their souls into their music.

While I’m talking about the effort put forth by the individual members, Hana Hajdová’s clean vocals are probably the best feature of the album. They have this passionate charisma about them that makes up for duller instrumental loops. There’s also a certain familiarity about the clean vocals on Smutnice. It reminds me a bit of the vocal performance on Eluveitie’s newest album. The two best songs on the album were both so memorable because of the exceptional lyrical songwriting. “Ptakoprav”, the first one that pops out, has a seemingly single sound rhyming scheme. The words are so catchy and flow so well that even people who can’t understand the language will eventually be able to sing along. The prominence of the violin also helps give the track, “Bard Song”, levels of memorability. Two or three goes will most likely trap that song in your head for a week or so. “Za nevestou”, and, “Tichy zpev”, are the two other noticeable stand-out songs on the album. Unsurprisingly, both of them have this same shining vocal performance, the former with choirs and the latter with a very beautiful duet.

Overall it seems most of the appeal of this album would most likely be the songwriting and vocals unless you’ve got some sort of fixation on the well written folk melodies which then even just recycle themselves so much its absurd. Like I said, there is a lot of talent on this album for all the repetition, and there is even some pretty decent bass riffs on several tracks, the best of which is, “Maloverna”, which is even bass driven. The reason why the score is as high as it is can be mainly attributed to the originality of the content and the talent of the players themselves, especially the vocalists. It is also a healthy change to see a band with classical instruments that doesn’t play the same cinematic orchestral pomp for the sake of being epic, which is also a huge plus for this band. Bear in mind that Smutnice is a well-written and executed release overall, and the main reason why I’m criticizing the repetition is in principle; it doesn’t ruin the album. It just becomes a bit distracting by the second track – and then doesn’t go away.